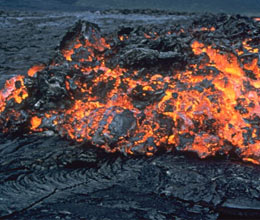 A'a is a blocky, angular, and rough type of lava flow. The word is Hawaiian and is pronounced "ah-ah" it was introduced as a geological term by C. E. Dutton in 1883.

The incredibly spiny surface of a solidified a'a flow makes walking on it very difficult and slow. The clinkery surface actually covers a massive dense core, which is the most active part of the flow. As pasty lava in the core travels down slope, the clinkers are carried along at the surface. At the leading edge of an a'a flow, however, these cooled fragments tumble down the steep front and are buried by the advancing flow. This produces a layer of lava fragments both at the bottom and top of an a'a flow.