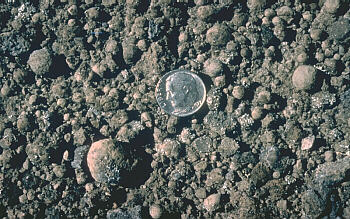 These accretionary lapilli on the surface of the Ka'u Desert south of Kilauea caldera. The lapilli formed during explosive eruptions of Kilauea in 1790. Credit: US Geological Survey. 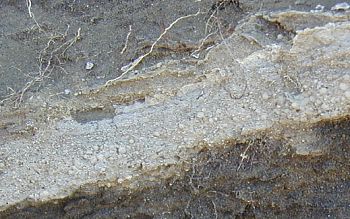 Layer of tephra consisting of accretionary lapilli surrounded by wind-deposited ash in the Ka'u Desert, Kilauea Volcano. This layer is one of several found at this location, about 10 km from Kilauea's summit caldera. Credit: US Geological Survey

Rounded tephra balls between 2 mm and 64 mm in diameter are called accretionary lapilli if they consist of tiny ash particles. Volcanic ash sometimes forms such balls in an eruption column or cloud, owing to moisture or electrostatic forces. Lapilli (singular: lapillus) means "little stones" in Italian.