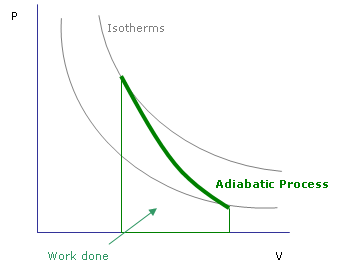 Pressure vs. volume graph of an adiabatic process. The work done during the process is the area under the curve between the starting and ending volumes.

An adiabatic process is a thermodynamic process in which no heat enters or leaves a system during expansion or compression of the fluid composing the system. An example of an adiabatic process is the vertical flow of air in the atmosphere; air expands and cools as it rises, and contracts and grows warmer as it descends. Another example is when an interstellar gas cloud expands or contracts.

Adiabatic changes are usually accompanied by changes in temperature. In most situations, truly adiabatic changes must take place in short time intervals so that the heat content of the system remains unchanged, or else the system must be perfectly insulated (a practical impossibility). The generation of heat when a gas is rapidly compressed, as in a piston, is approximately adiabatic.