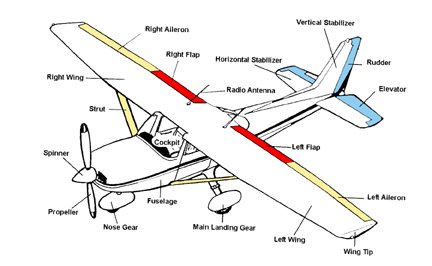 Fig 1. Some of the main components of a light aircraft

Fig 2. Control surfaces behave like miniature wings. These surfaces are: ailerons for roll (A) about the longitudinal axis, giving lateral control; elevators for pitch (B) about the lateral axis for longitudinal control; and a rudder for yaw (C) about the vertical axis for directional control. Each surface is hinged and is controlled from the cockpit. When deflected the surface's main effect is not to push the whole aircraft but to cause it to rotate about one of its axes. Sideways movement of the control column moves the left and right ailerons in opposite directions because, as one wing comes up the other must go down. Fore-and-aft movement of the stick deflects left and right elevators together because both act together in raising or lowering the tail for a dive or climb. In super-sonic aircraft there are sometimes no ailerons and the left and right tailplanes can twist in opposite directions for roll control. The rudder is moved by foot pedals and one of the things a pupil pilot must learn is how to "harmonize" the various controls, working the stick and pedals together to just the right degree. In very large or fast aircraft, some or all of the control surfaces are hydraulically powered and an artificial "feel" is fed back to the pilot's controls in the cockpit.

Fig 3. Stalling occurs when the angle at which the airflow meets the wing exceeds a critical value. At high speed (A) the angle is small. At lower speeds the nose must be pulled up more and more to maintain height (B). Suddenly the aircraft stalls and a spin (C) may result. 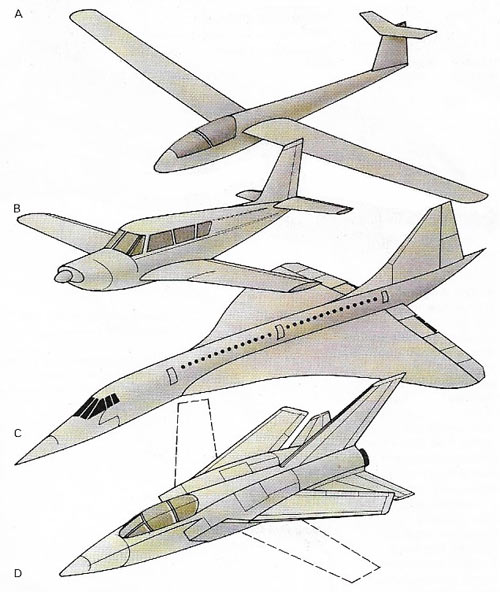 Fig 4. Wing shapes vary depending on their purpose. Sailplanes (A) and man-powered aircraft have long, narrow wings to give maximum lift and minimum drag at low speeds (80–145 km/h (50–90mph) for a high-performance glider). Light planes (B) have simple, thick wings that provide good lift at low speeds. A supersonic airliner (C) has a wing that is optimized for cruising at twice the speed of sound (Mach 2: 2,175 km/h (1,350 mph)). It is rather like a Gothic window flying apex-first and is less efficient at take-off and landing. Supersonic combat aircraft (D) often have variable-sweep "swing wings" that can be folded back for operational flying or spread out sideways for cruising or "loitering"> 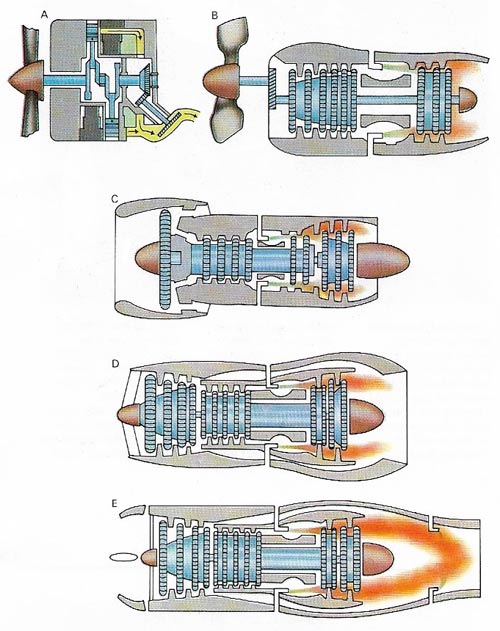 Fig 5. Aircraft propulsion is tailored for the job. The piston engine (A) is cheap and efficient for slow aircraft. The turboprop (B) also handles a huge airflow but it is better suited to larger aircraft. Turbofans (C–E) are best for aircraft that fly at high subsonic speeds, such as airliners. In (C) the fan at the front of the engine displaces air round the main engine. In (D) several fans force air along bypasses and into the tailpipe. Turbofan E has an afterburner. Extra fuel is injected ti burn in the tailpipe and so provide more power. But it is noisy and generally used only for highly supersonic aircraft.

An airplane is a heavier-than-air machine that is kept aloft by the forces on its wings. It is thrust forward by a propeller or other means of propulsion, such as a jet or rocket.

Common types of airplanes are airliners, large planes usually used to transport passengers; military planes; and general-aviation aircraft, which cover all airplanes that are not airliners or military aircraft. They generally are smaller than airliners and can transport people or cargo or perform a wide variety of specialized functions such as crop-dusting, flight training, and recreational flying.


How an airplane works

If someone holds a sheet of paper in both hands and raises it in front of his face, tilting the near edge slightly downwards, most of the sheet (beyond the hands) arches down towards the floor. What happens if he blows across the top of the sheet? Oddly enough, it rises until it is stretched out horizontally. One might have expected this by blowing on the underside, but why is the sheet lifted by blowing over the top? The answer lies in the effect that speed of flow has on the pressure of air. In the case of the paper, and the arched shape of an airplane's wing, air flowing over the top has to flow farther than that crossing underneath. The upper air therefore speeds up and as a result, its pressure falls. The higher pressure of the slower air below creates "lift". This effect is responsible for about 80 percent of the lift on a normal aeroplane wing moving at less than the speed of sound.

Modern aeroplane wings are not like sheets of paper but are more-or-less fixed in cross-section. A conventional subsonic section always has a strongly arching top. The underside may be fairly flat in slow aeroplanes, with the thickest part of the wing well forward (towards the "leading edge"). In fast aircraft the wing looks almost symmetrical, so that it would work either way up, and the thickest part is about half-way between the leading edge and trailing edge. In every case most of the lift is generated by reduced pressure as air curves faster over the top. A little lift is added by increased pressure underneath.

For any given wing the lift depends on the angle of attack (the angle at which the wing meets the oncoming air). The greater the angle, the greater the lift – up to a point. Some modern aircraft with short but wide wing shapes, such as Concorde, can go on generating lift to seemingly impossible angles; but ordinary wings soon run into trouble. At an angle of about 16° there is little more lift to be had. By 18° the lift is erratic, the flow finds it hard to remain attached across the top of the wing and, suddenly, it breaks away. Instead of smooth, streamlined flow, the air billows away in great eddies. Lift is largely lost and any aircraft flown at such an angle of attack stalls (2).

Wing lift also depends on the square of the airspeed; lift at a given angle of attack may be 1,000 kg at 100 km/h, 4,000 kg at 200 km/h and 9,000 kg at 300 km/h. So how does an airplane take off? The pilot knows its gross weight, the airfield's height above sea-level and the air temperature (hot or high places have thinner air and give less lift). For each set of conditions he knows how fast the wing must move through the air in order that maximum lift (with a safe margin left to avoid stalling) shall exceed the weight. In all but the most simple aircraft the lift at low speeds can be greatly increased by extending flaps behind and below the trailing edge and, often, by using "Kreuger flaps" along the leading edge that serve to increase the curvature of the wing section. These devices change the apparent cross-section of the wing, making it act far more effectively on the airflow and greatly intensifying the difference in pressure between the underside and upper surface. At the correct speed the pilot pulls back on the control column (Fig 2). This deflects the horizontal tail (elevators or, often, the whole tailplane) so that it is tilted sharply, with the leading edge pointing downward. Immediately the airflow pushes the tail down, the whole aircraft rotates, the wing reaches the angle at which lift exceeds weight and the aircraft climbs away.

As speed and height are gained the pilot "cleans up" the aircraft by retracting the various flaps. The wing can lift the aircraft without them and, as speed continues to increase, the angle of the wing becomes less and less and the aircraft levels out. At full speed the wing skims virtually edge-on to the airflow. But in any sudden maneuver, such as a tight turn, the wing has to generate vastly increased lift. In the most violent maneuvers it is possible to reach stalling angle even at high speed. Normally a stall-warning system alerts the pilot of any approach to stall and this is especially important in thin air at great heights where wing angles are greater under all conditions. The "absolute ceiling" that the aircraft can reach is, in fact, the altitude at which level flight demands the stalling angle even at maximum speed.

In straight and level cruising flight the control surfaces on the wings form an integral part of the lifting surface. Any movement of the cockpit controls deflects these surfaces or the tail rudder to make the aircraft rotate about one or more of its axes (1). Roll and pitch commands are often needed; the rudder is used mainly in making a "coordinated" turn, with the nose of the aircraft moving left or right along the horizon, the wings tilted to give a lift force acting towards the centre of the turn and the rudder and elevators acting together. When landing the pilot places the aircraft in exactly the right position, aiming along the runway centerline, at such a speed that the wing (with all high-lift devices extended) reaches stalling angle just as the wheels make grazing contact with the runway. Many aircraft extend "spoilers" as they touch down to kill remaining lift. The same spoilers can be used with or instead of ailerons to produce roll motion in high-speed flight or as air brakes on a landing approach.