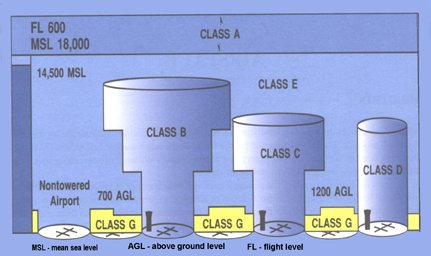 All airspace classes have specific rules for flight with aircraft instruments and flight using visual navigation beginning at sea level and continuing to 60,000 ft (18,288 m) above sea level. Except in Class A airspace, pilots may fly using either instrument or visual rules. Class A airspace begins at 18,000 ft (5,486 m) above mean sea level (MSL), and only aircraft using instrument rules for navigation can safely and legally operate there.

Above an airport or urban area, stricter rules and more procedures apply to planes flying closer to the ground. These rules often get less strict the higher the pilot flies, forming invisible circular tiers that widen with altitude. The result is a series of what many pilots think of as upside-down wedding cakes, with shapes that vary depending on the size of the airport or the nearest urban area or obstruction.

All airspace classes require certain pilot qualifications, aircraft equipment, airspeeds and altitudes, clearance from clouds, and communication procedures. In addition, each controlled airspace class sets additional requirements and is subject to one of the more than 20,000 federal air traffic controllers or the hundreds of pages of rules in the Federal Aviation Regulations.

The largest area of controlled airspace is called the continental control area. This is the airspace above the 48 contiguous United States and Alaska and the waters within 12 NM (22 km) of the coast. It begins at 14,500 ft (4,420 m) above MSL.