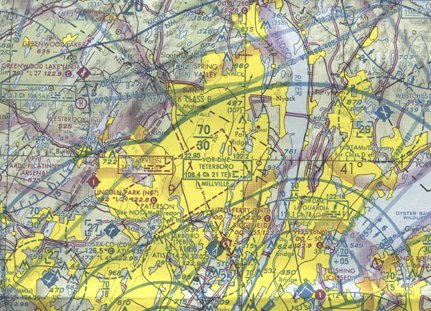 In most cases, aircraft, especially airliners, cannot simply fly from one point directly to another. Rather, they must follow designated airways. Airways are an invisible three-dimensional network of routes that zigzag within controlled airspace. Sometimes called corridors, most are nine miles (14 km) wide. Within these corridors, aircraft fly separated by at least 1,000 ft (305 m) of distance above and below them when they are at altitudes up to 29,000 ft (8,839 m). Above 29,000 ft (8,839 m), aircraft are separated by at least 2,000 ft (610 m) because controllers have more difficulty tracking aircraft at this altitude and flying at the speeds for that altitude.

Each airway carries its own name, required airspeed, radio and cockpit instrument procedures, operating altitudes, and rules for entering and leaving the airway. The low-altitude Victor Airways run from 700 ft (213 m) above ground level to 18,000 ft (5,486 m), while Jet Routes run from 18,000 ft to 35,000 ft (5,486 m to 10,668 m). Within these broad groups, all navigation aids such as radio transmission stations, visual and satellite checkpoints, and the responsible control center have names and unique abbreviations. This complex language is printed on pilot charts and in thick directories. Low-altitude airways are shown on the sectional aeronautical chart.

At points where these invisible roadways intersect, radio signals from ground stations mesh to form an electronic picture on cockpit instruments that looks like a road intersection. The Federal Aviation Regulations and air traffic controls set rules for how to cross airways and at what altitude, what intersections to use, and at what angle and speed of flight to enter and leave them.