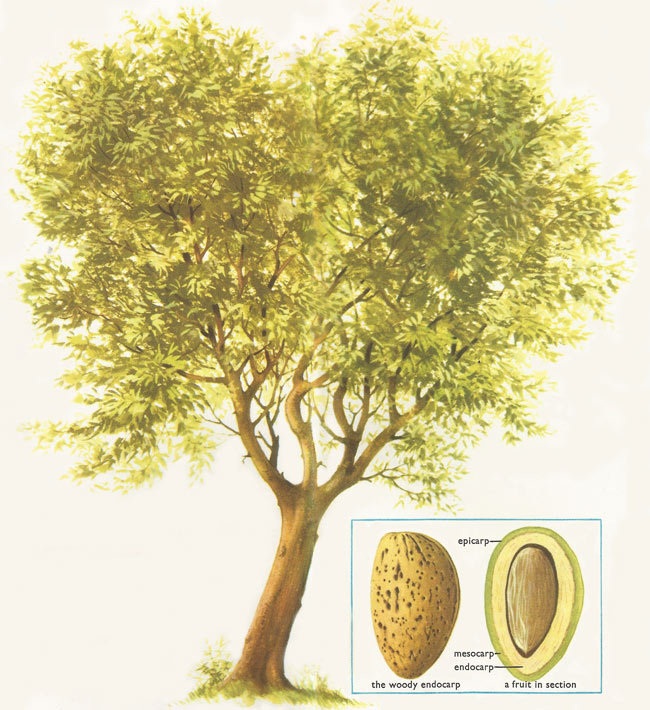 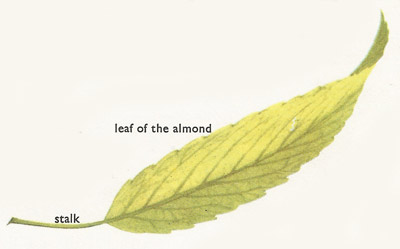 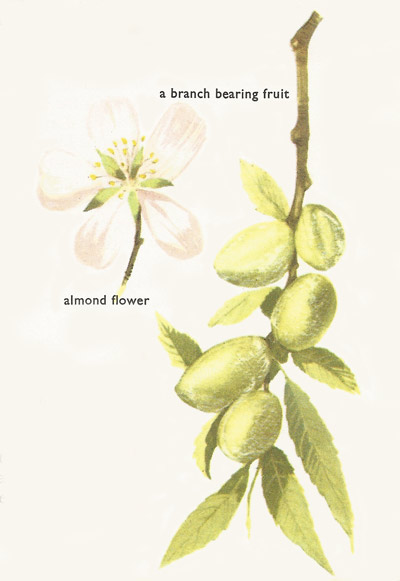 It is interesting to note that the almond tree is closely related to the peach tree. However; the botanical name of the peach is Prunus persica and that of the almond Prunus amygdalus. The difference is, of course, that we eat the flesh of the peach and throw away the stone and seed, while in the case of the almond the flesh is discarded and the seed is eaten (see nut).

The almond grows wild in the Near-Eastern countries of Turkestan and Iran and is planted as an orchard tree in southern Europe, Morocco, California, and Australia.

Almond trees are very beautiful when in flower, and in Italy their blooming is celebrated by a festival, rather as 'cherry-blossom time' is celebrated in Japan. The almond is grown as an ornamental tree in Britain, but the fruit hardly ever ripens in this country.

The almond tree grows from 15 to over 30 ft in height; if it is to produce fruit it requires a climate free from winter frosts. This is because its flowering time is very early in the season, and frost, while it may not harm the tree, will kill the flowers. In the most southern regions of the Northern Hemisphere, where the almond is grown, it can flower as early as Dec, but is more usually in bloom from Jan to Apr. In Sicily, in the Mediterranean, Feb is the flowering season.

In Europe almonds are often planted in mixed orchards, together with vines, olives, and other fruit crops. Much of the fruit is used by the growers themselves, and exports consist of the surplus nuts produced by numerous small farmers. In California almond-planting is more systematic. The orchards are in sheltered valleys protected from frost, and carefully selected varieties are grown. Among them are included, here and there, trees whose flowers produce abundant fertile pollen (their nuts may not be worth harvesting), and bees are kept in the orchards specially to pollinate the flowers and so ensure the 'setting' of the fruit.

Shown above is a spray of an almond tree; the bark is glossy and green and the flowers a delicate pink. As in some allied trees, such as blackthorn and cherry, the flowers appear in the spring before the leaves. As a result, the masses of blossom are not hidden by foliage and the trees look beautiful.

The leaves are of the shape called 'lanceolate' – that is, narrow and tapering to an end – and are toothed or serrated at the edges. They are deciduous, which means that they fall off in the cold season.

The flowers are pale pink and are borne singly or in clusters. They have five petals. a mark of the family to which the almond belongs; the great rose family or Rosaceae.

The sepals are joined together, and they fall off when the flower withers and the fruit begins to form. The stamens are numerous, from 20 to 40 in number.

The unripe fruit is green and downy, rather like a small peach, but as it ripens it turns, not rosy pink but dull grey. The outer covering is not thick and fleshy but leathery and quite thin, and is called the hull. When the fruit is ripe the hull splits and the nut falls out.

In the language of botany the skin and hull are the epicarp and mesocarp. and the shell of the nut the woody endocarp. The part that we eat, the kernel, is the seed.

As many as 750 varieties of the almond are recognized, grouped into two main categories: those which produce sweet almonds (Prunus amygdalus, variety dulcis) and the bearers of bitter almonds (variety amara). The flavor of bitter almonds is due to a substance called amygdalin. When we chew a bitter almond the amygdalin comes into contact with our saliva and is turned into glucose, hydrocyanic acid, and benzaldehyde; the last two of these are poisonous.

If the bitter almonds are eaten in any quantity a definite and severe type of poisoning may result. The symptoms are dizziness, vomiting, and difficulty in breathing. In serious cases death has been known to occur.

If the symptoms become acute a doctor must be called without delay, and he may have to use a stomach-pump and apply artificial respiration.

Every part of the almond can be used.

Sweet almonds are eaten as dessert and are used to make confectionery, such as sugared almonds and the delicious almond icing that we call marchpane or marzipan. They are also eaten roasted and salted. A kind of milk, too, can be made from sweet almonds that is very pleasant and wholesome to drink.

Almond oil is obtained from seeds of both sweet and bitter almonds, particularly the latter. This oil is used as a base for skin-creams and high-quality soap. From the residue of bitter-almond oil a volatile (liable to evaporate) oil can be produced by distillation; this is used to make flavoring extracts. This oil is also sometimes used to give a pleasant taste to medicines. Almond shells can be used as fuel for the ovens in which distillation is carried out.

Finally, the almond tree is so beautiful that it is often grown for ornament, and therefore has a definite use in horticulture.


The bitter almond has a similar composition but the percentage of sugar is lower, and it contains in addition the substance called amygdalin.