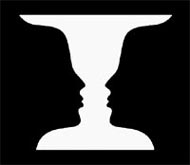 An ambiguous figure is an illusion in which the subject or the perspective of a picture or shape may suddenly switch in the mind of the observer to another, equally valid possibility. Often the ambiguity stems from the fact that the figure and ground can be reversed. A example of this is the vase/profile illusion, made famous by the Danish psychologist Edgar John Rubin (1886–1951) in 1915 (see illustration), though earlier versions of the same illusion can be found in many 18th-century French prints depicting a variety of vases, usually in a naturalistic setting, and profiles of particular people. The same effect can be created in three dimensions with a suitably shaped solid vase.

In some ambiguous figures, the features of a person or of an animal can suddenly be seen as different features of another individual. Classic examples include the old woman-young woman illusion and the duck-rabbit illusion. Upside-down pictures involve a special case of dual-purpose features in which the reversal is accomplished not mentally, by suddenly "seeing" the alternative, but physically, by turning the picture through 180°.

Ambiguity can also occur, particularly in some geometric drawings, when there is confusion as to which are the front and the back faces of a figure, as the Necker cube, the Thiery figure, and Schröder's reversible staircase.