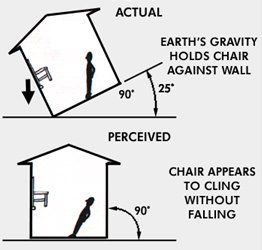 The House of Mystery in the Oregon Vortex, Gold Hill, Oregon, built during the Great Depression in the 1930s, can claim to be the first "antigravity house." It spawned many imitators around the United States and in other parts of the world. Such buildings give rise to some spectacular visual effects, which seem bewildering until the underlying cause is revealed. Of course, the visitor guides are not forthcoming about what is really going and make fantastic claims about magnetic or gravitational anomalies, UFOs, or other weird and wonderful phenomena. The fact is that all the stunning effects stem from clever construction and concealment that make, in the mind of the visitor, an incline seem like a horizontal. All antigravity houses are built on hills, with a typical incline of about 25°. But unlike a normal house on the side of a hill, an antigravity house is built so that its walls are perpendicular to the (inclined) ground. In addition, the area around the house is surrounded by a tall fence that prevents the visitor from establishing a true horizontal. Thus compelled to fall back on experience, the visitor assumes that the floor of the house is horizontal and that the walls are vertical with respect to Earth's gravity. All the stunning visual shenanigans follow from this.

As well as human-made antigravity illusions, there are also a number of remarkable natural locations around the world where gravity seems to be out of kilter. One example is the "Electric Brae," known locally as Croy Brae, in Ayrshire, Scotland. This runs the quarter-mile from the bend overlooking Croy railway viaduct in the west (86 m above sea-level) to the wooded Craigencroy Glen (92 m above level) to the east. While there is actually a slope of 1 in 86 upward from the bend at the Glen, the configuration of the land on either side of the road creates the illusion that the slope runs the other way. The author is among countless folk who have parked their cars on this stretch of road with the brakes off and been amazed to see it roll apparently uphill.