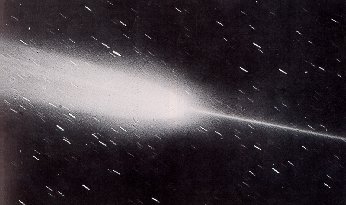 The antitail is part of the dust tail of a comet that seems to point, often like a spike, toward the Sun. This rare phenomenon is an illusion caused by the viewing geometry and typically occurs when Earth crosses the plane of a comet's orbit when the comet is relatively close to the Sun. Under these circumstances, the cometary dust, which lies in a thin sheet and lags behind the comet, may be seen edge-on as an antitail. One of the most prominent antitails ever seen was that of comet Arend-Roland during its perihelion passage in 1957.