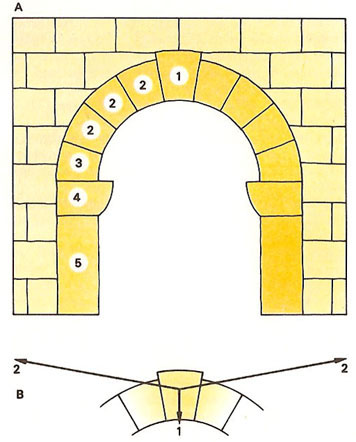 (A) Round arch with (1) keystone, (2) voussoir, (3) springer, (4) impost, (5) pier. (B) The forces acting on the keystone: the downward load (1) is balanced by the upward thrust (2) from the two adjacent voussoirs. Ultimately, of course, the sideways components of these forces are borne by the wall into which the arch is built. 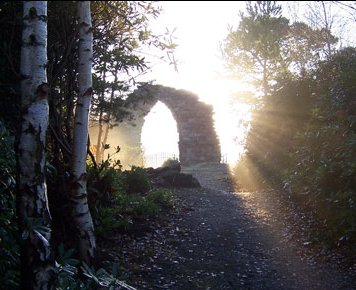 An arch is a strong, curved structure, traditionally made from wedge-shaped elements, that may take many different forms and that provides both an opening and a support for overlying material.

Two common forms are the semicircular arch, first commonly used by the Romans (though known to the ancient Egyptians and Greeks), and the pointed Gothic arch. The semicircular arch is the weaker of the two because it supports all the weight on the top and tends to flatten at its midpoint. It also requires massive supporting walls since all the stress on the arch acts purely downward. The pointed arch, by contrast, directs stresses both vertically and horizontally, so that the walls can be thinner, though buttressing may be required to prevent the walls from collapsing sideways. See the section "Types of arch" below.

In the construction of most arches, wedge-shaped stones, called voussoirs, are fitted together so that the stresses in the arch exert outward forces on them; downward forces from the load combine with these to produce a diagonal resultant termed the thrust. The voussoirs at each end of the arch are termed springer's; that in the center, usually the last to be inserted, is the keystone.

One of the strongest arches in brick masonry. It springs from a horizontal seat at and on the spring course, and the way its haunch crowns up adds to its strength.

An arch with a rather high rise, with sides consisting of arcs of circles, the centers of which are at the level of the spring line. The Gothic arch is often referred to as a crop, equilateral, or lancet arch, depending upon whether the spacing of the centers are less than, equal to, or more than the clear span.

The strongest of all arches. It has a gradual oval shape.

A semicircular arch. If built of stone, all units are wedge-shaped.

Similar to the semicircular arch, it consists of a segment of a circle.