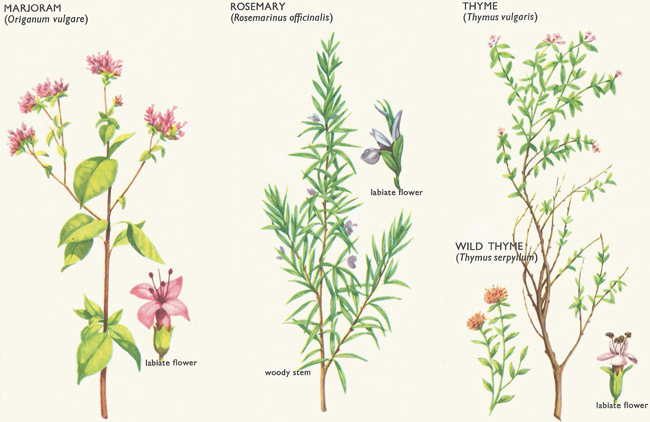 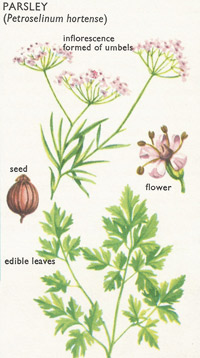 The use of strong-tasting herbs to flavor food is probably as old as the art of cooking. Even the most primitive peoples of today use herbs in this way; in fact, the make particular use of them, as their food, such as rotting meat, was often almost inedible without flavoring of some kind. It is very probable that even the Stone Age people had a good knowledge of whatever herbs grew wild in the part of the world in which they lived. The meat of the mammoth, for instance, would almost certainly have been better for being spiced.

Today anyone can grow enough herbs to supply their own cooking needs, for only small quantities are used and the plants take up very little space. Mint, parsley, sage, and thyme are all easy to grow.

Most herbs are best used fresh, but they can be dried and stored. To preserve mint or sage, pick young shoots and dry them crisp in a cool oven, parsley is best put in a hot oven for about a minute, as it will lose its color if dried slowly. When dry, the herbs should by powdered down and stored in well-stoppered bottles.

Aromatic herbs are also valued for their pleasant scent. Not so long ago, when the hygiene of cities left much to be desired, fastidious people carried a posy of herbs as a protection against the unpleasant smells which surrounded them. Since at that time it was thought that diseases were caught from breathing bad air, the herbs were also regarded as beneficial to health. This, of course, was before the discovery of bacteria and viruses. Today bags of dried lavender are often put in cupboards to scent stored clothes.

In the past several herbs were used to symbolise things; rosemary stood for remembrance, sage for domestic virtue, and rue for bitterness.

Wild marjoram is quite common in dry, grassy places. especially on chalk downs. It flowers in summer, from July to September, and is very aromatic; its scent often attracts clouds of insects. Like many of the herbs used for flavoring, it belongs to the plant family Labiatae.

A variety called sweet marjoram (Origanum marjorana) is grown in gardens, and it is this that is generally used in cooking.

Rosemary is a native of southern Europe and Asia Minor, but can be grown as a garden shrub in more northern climates. It can be easily propagated by cuttings.

The so-called wild or bog rosemary (Andromeda polifolia) is a plant of the heath family and in no way related to Rosemarninus. It is important not to confuse them, for bog rosemary is poisonous.

The cultivated herb is a native of the Mediterranean region but grows well in gardens of colder climates. Wild thyme (Thymus serpylllum or drucei) is common in Britain in dry, grassy banks, especially on chalk. The flowers have a strong pleasant scent and provide bees with a copious amount of honey.

Thyme is used in flavoring savory dishes and for making stuffing for poultry.

Sweet basil is probably native to India and will not survive the winter of a temperate climate. If the plants are lifted and put in pots in September (in the northern hemisphere) they can be kept in a greenhouse and planted out again in the spring. Wild basil (Clinopodium vulgare) is not closely related to sweet basil though both belong to the family Labiatae, as indeed do all the herbs mentioned here, with the exception of parsley.

As well as being useful as a condiment, sweet basil has a fresh scent, although insects find it repellent. Bunches of the herb are sometimes hung up to keep away flies. Its name, basilicum, is derived from the Greek word for a king, and shows that it has been a royal favorite from early days.

Used as a condiment, it has a distinct flavor of cloves.

Sage is a perennial plant that is liable to be killed by frost in winter, as it is native to southern climates. For this reason it must be planted in a sheltered place. It can be sown again each year by seed and will grow from cuttings.

A wild sage called 'clary' (Salvia verbenaca) and wood sage (Teucrium scorodonia) are both occasionally used in cooking. Wood sage has a faint flavor of garlic.

Sage is one of the most valuable herbs, used in savory dishes and especially in stuffing for poultry.

Although it is not now regarded as a medicinal herb, an infusion of sage leaves was formerly used as a remedy for coughs and other bronchial complaints. The name salvia is derived from the Latin salvere, meaning 'to be in good health'.

Whether other herbs are grown or not, no garden is complete without a bed of parsley. If this this grown in a cold frame, fresh leaves will be available all year round.

The leaves of parsley are suitable for decorating or garnishing dishes, and it can be used to make sauce or to flavor a wide variety of savory food. Parsley belongs to the plant family Umbelliferae.

Quite a number of umbelliferous plants are used in cooking, including angelica, chervil, and caraway, as well as parsley and the root vegetables carrot and parsnip. It is as well to know therefore, that one of them, a common wild plant, is dangerously poisonous. This is hemlock.

The flowers are small and white and borne in umbels like those of other plants of the family. The stem is hollow and green, spotted and purple. The plant has an unpleasant 'mousy' smell when crushed or bruised, and this is probably the surest way of recognizing it.

The poison was used by the ancient Greeks for executing criminals, and the philosopher Socrates was put to death this way.