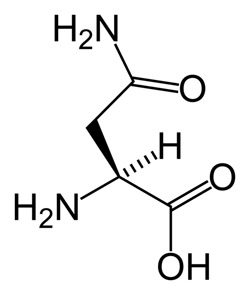 Asparagine is a crystalline amino acid that occurs in proteins. It was the first amino acid to be discovered (in 1806 in asparagus). It has the chemical formula NH2COCH2CH(NH2)COOH and a melting point of 234°C.

Asparagine hydrolyzes to another amino acid, aspartic acid, HOOCCH2CH(NH2)COOH. l-asparagine is very widely distributed in plants, being found in all Leguminosae (see legume) and Gramineae, and in many other seeds, roots, and buds. dl-asparagine can be synthesized from ammonia and maleic anhydride.