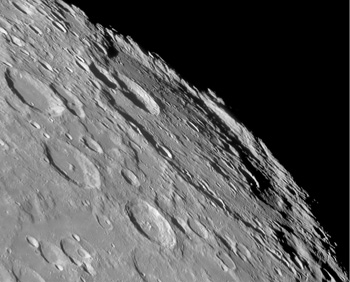 Bailly is an enormous, highly eroded lunar crater, 298 km (185 mi) in diameter. It is one of the largest ring-formations on the Moon. Unfortunately, for the amateur astronomer, Bailly lies on the south-eastern limb and can only be observed at certain librations and under very favorable conditions. The walls are broken up by many small craters and rise to over 4,000 m. There is a wealth of detail on the floor, including a prominent ridge running north-south and a particularly prominent pair of secondary craters (A and B). Bailly A is a comparatively recent formation, as it breaks up not only the wall of Bailly itself but also that of B. Bailly B is extraordinarily deep, being only about 64 km in diameter but with a depressed interior over 4,250 m below the crest of its wall. Bailly is named after the French astronomer Jean Bailly.

Jean Bailly was a French astronomer and politician. After studying the Jupiter and writing a five-volume history of astronomy (1775–87), he turned to politics, becoming mayor of Paris (1789–91); he was executed in the Terror. Out of all proportion to his importance to astronomy, he had the largest crater on the nearside of the Moon named after him.