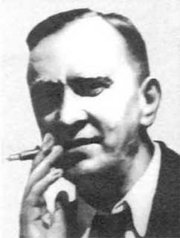 Stefan Banach was a great Polish mathematician who founded functional analysis and also made important contributions to the understanding of vector spaces, measure theory, and set theory. His name is associated with Banach space, Banach algebra, the Hahn-Banach theorem, and the remarkable Banach-Tarski paradox.

Largely self-taught in mathematics, Banach was "discovered" by Hugo Steinhaus and when World War II began was President of the Polish Mathematical Society and a full professor at Lvov University. Being on good terms with Soviet mathematicians, he was allowed to hold his chair during the Soviet occupation of Lvov. The German occupation of the city in 1941 resulted in the mass murder of Polish academics. Banach survived, but the only way he could work for a living was by feeding lice with his blood in a German institute where typhoid fever research was conducted. His health undercut during the occupation, Banach died before he could be repatriated from Lvov, which was incorporated into the Soviet Union, to Poland after the war. Théorie des opérations linéaires (Teoria operacji liniowych, 1932) is regarded as his most influential work.

First stated in 1922 and one of the great mathematical principles devised by Stefan Banach, the fixed-point theorem has become a vital ingredient in the theory of metric spaces (sets in which a notion of distance, called a metric, between elements of the sets is defined). The theorem has been used extensively in the field of topology and mapmaking. Explaining it without the aid of graphs and algebra, however, is not easy.

Imagine somebody climbing a mountain. The climber begins at midday and reaches the summit six hours later. He or she stays on the summit overnight and the following day descends, beginning at midday again and taking just four hours to return to the starting point. Now imagine this depicted as a graph. There are two lines; one – the ascent – begins in the bottom left of the graph and heads to the top right, denoting time and height; the other line – the descent – starts at the top left of the graph, the summit's starting point, and goes down toward the bottom right. It is inevitable that at some point the two lines are going to have to intersect, and the point at which they do is an example of a mathematical "fixed point".

Variations in Banach's fixed-point theories are not restricted to mathematics, and also can be decidedly unfixed. For example, according to the Brouwer fixed-point theorem devised by Dutch mathematician Luitzen Brouwer (1881–1966), if a person stirs a cup of coffee there will appear to be a point on the surface that is not moving. Due to the turbulence of the swirling coffee, however, it is fair to assume that the fixed point is in fact mobile and traverses the surface. Over the past fifty years, the fixed-point theorem has also been adopted for use in engineering, biology, and quantum mechanics. The Kakutani version (1941) is widely used in game theory and economics.