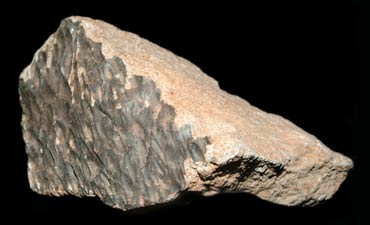 One of the largest pieces of the Barwell meteorite, held in the Natural History Museum, London.

The Barwell meteorite was the biggest meteorite to land in Britain in recorded history; an L6 ordinary chondrite, it fell in pieces on the Leicestershire village of Barwell on Christmas Eve 1965. Fragments variously penetrated 20 cm into a tarmac drive, landed on the hood of a car, and smashed through a factory roof; one tiny piece was even found later in a vase. With the British Museum offering seven shillings and sixpence (the equivalent today of more than $10) per ounce for specimens, Barwell became something of a gold town. When the fragments were put together, the Barwell Meteorite proved, appropriately, to be about the size of a Christmas turkey.