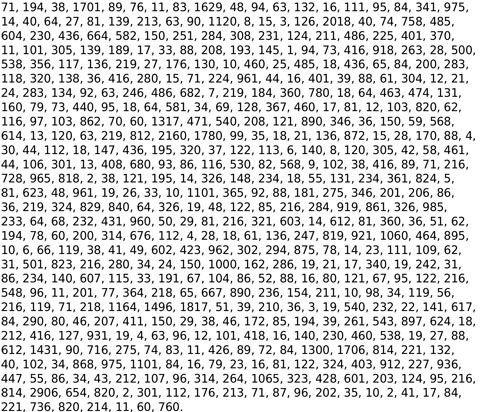 The Beale ciphers may be one of the greatest unsolved puzzles in cryptography – or a mere hoax. About a century ago, a fellow by the name of Thomas Beale supposedly buried two wagonloads of pots filled with silver coin in Bedford County, near Roanoke, Virginia. There are local rumors about the treasure being buried near Bedford Lake. Beale wrote three encoded letters telling what was buried, where it was buried, and to whom it belonged. He entrusted these three letters to a friend, went west, and was never heard from again. Several years later, someone examined the letters and was able to crack the code in the second one, which turned out to be based on the text from the Declaration of Independence. A number in the letter indicated which word in the document was to be used. The first letter of that word replaced the number. For example, if the first three words of the document were "We hold these truths," the number 3 in the letter would represent the letter t. The second letter translated as follows:

I have deposited in the county of Bedford about four miles from Bufords in an excavation or vault six feet below the surface of the ground the following articles belonging jointly to the parties whose names are given in number three herewith. The first deposit consisted of ten hundred and fourteen pounds of gold and thirty eight hundred and twelve pounds of silver deposited Nov eighteen nineteen. The second was made Dec eighteen twenty one and consisted of nineteen hundred and seven pounds of gold and twelve hundred and eighty eight of silver, also jewels obtained in St. Louis in exchange to save transportation and valued at thirteen [t]housand dollars. The above is securely packed i[n] [i]ron pots with iron cov[e]rs. Th[e] vault is roughly lined with stone and the vessels rest on solid stone and are covered [w]ith others. Paper number one describes th[e] exact locality of the va[u]lt so that no difficulty will be had in finding it.

One of the remaining letters supposedly contains directions on how to find the treasure but, to date, no one has solved the code. One theory is that both the remaining letters are encoded using either the same document in a different way, or another very public document. Or, of course, this could all be an elaborate, but entertaining, wheeze. Those interested may wish to contact The Beale Cypher Association, PO Box 975, Beaver Falls, PA 15010.