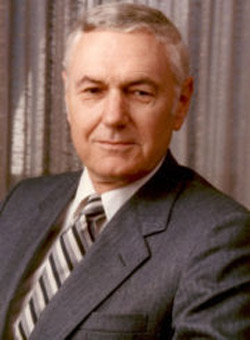 James Beggs was NASA's sixth Administrator. Beggs served in this post from July 10, 1981, to December 4, 1985, when he took an indefinite leave of absence pending disposition of an indictment from the Justice Department for activities taking place prior to his tenure at NASA. This indictment was later dismissed and the Attorney General apologized to Beggs for any embarrassment. His resignation from NASA was effective on February 25, 1986. Prior to his appointment at NASA, Beggs had been executive vice president and a director of General Dynamics, having previously served with NASA in 1968-69 as Associate Administrator in the Office of Advanced Research and Technology. A 1947 graduate of the United States Naval Academy, Beggs served with the Navy until 1954. He later worked as a consultant from his offices in Bethesda, Maryland.