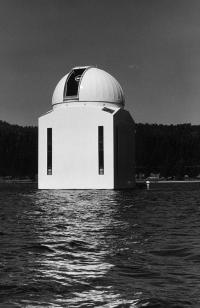 Big Bear Solar Observatory is an observatory built on an artificial island in the middle of Big Bear Lake in the San Bernadino Mountains of southwest California. The island location reduces the image distortion that usually occurs when the Sun heats the ground and produces convection in the air above. Turbulent motions in the air near the observatory are also reduced by the smooth flow of wind across the lake. These conditions, combined with the usually cloudless skies over Big Bear Lake and the clarity of the air at its 2,000-m elevation, make the observatory a premier site for solar observations.

The top floor of the observatory contains a single fork mount supporting four main instruments: a 65-cm vacuum reflector, and three smaller refractors for earthshine studies. The telescopes are equipped with special filters and cameras that isolate small portions of the visible, near infrared, and near ultraviolet portions of the Sun's spectrum. BBSO was built by the California Institute of Technology in 1969. Management of the observatory, and of an array of solar radio telescopes at Owens Valley Radio Observatory was transferred to the New Jersey Institute of Technology in 1997.