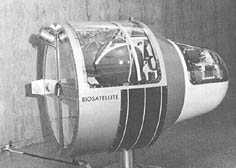 Biosatellite was a series of three NASA satellites to assess the effects of spaceflight, especially radiation and weightlessness, on living organisms. Each was designed to reenter and be recovered at the end of its mission.

The first two Biosatellites carried specimens of fruit flies, frog eggs, bacteria, and wheat seedlings; the third carried a monkey. Biosatellite 1 was not recovered because of the failure of a retrorocket to ignite. However, Biosatellite 2 successfully deorbited and was recovered in midair by the United States Air Force. Its 13 experiments, exposed to microgravity during a 45-hour orbital flight, provided the first data about basic biological processes in space. Biosatellite 3 carried a 6-kg male pig-tailed monkey, called Bonnie, with the object of investigating the effect of spaceflight on brain states, behavioral performance, cardiovascular status, fluid and electrolyte balance, and metabolic state. Scheduled to remain in orbit for 30 days, the mission was terminated after only 8.8 days because of the subject's deteriorating health. Despite the seeming failure of the mission's scientific agenda, Biosatellite 3 was influential in shaping the life sciences flight experiment program, highlighting the need for centralized management, realistic goals, and adequate preflight experiment verification.