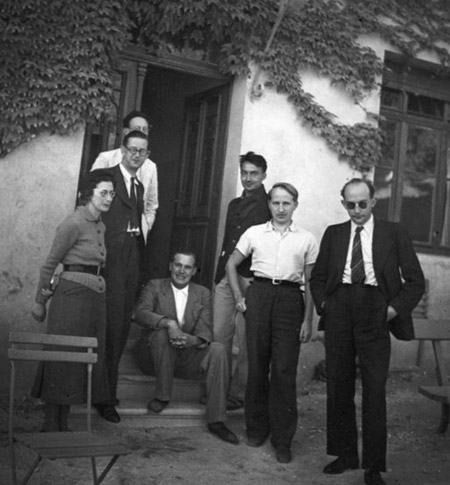 Nicholas Bourbaki was not an individual but a collective mathematician. In the 1930s, the Bourbaki group, made up of some of the brightest mathematicians in France, began as a club, holding secret meetings in Strasbourg to update university lectures and texts in the wake of World War I, which had essentially wiped out a generation of young talent. In time, Bourbaki authored encyclopedic accounts of all areas of mathematics and its influence became widespread.

Its origins can be traced to 1934 and to André Weil and Henri Cartan who were Maîtres de Conférences (the equivalent of assistant professors) at the University of Strasbourg. One of their duties was to teach differential and integral calculus but they found the standard text on this subject, Traité d'Analyse by E. Goursat, wanting. Following a suggestion by Weil to write a new "Treatise on Analysis," a group of about ten mathematicians began to meet regularly to plan the new work. Quickly, it was decided that the work should be collective, without any acknowledgment of individual contributions, and this became a feature of Bourbaki's output. In the summer of 1935 the pen name Nicolas Bourbaki was chosen, the initial membership consisting of Weil, Cartan, Claude Chevalley, Jean Delsarte, and Jean Dieudonné – all former students at the École Normale Supérieure in Paris. Over the years, the membership varied; some people in the first group dropped out quickly, others were added, and later there was a regular process of addition and retirement (mandatory by the age of 50).

Bourbaki adopted rules and procedures that to outsiders often seemed eccentric and even bizarre. For example, during meetings to review and revise drafts for the various books the group developed, anyone could express their opinion as loudly as they wanted at any time so that it was not uncommon for several distinguished mathematicians to be on their feet at the same time shouting monologues at the top of their voices. Somehow out of this mayhem emerged work of extreme precision, to the point of pedantry and dryness. Bourbaki would have nothing to do with geometry or any attempt at visualization, and believed that mathematics should distance itself from the sciences. However, despite its tendency to be boring and long-winded, Bourbaki did achieve its goal – to set down in writing what was no longer in doubt in modern mathematics.