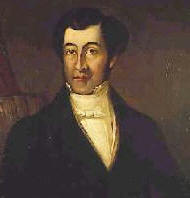 Joseph Bramah was an English engineer and inventor whose lock manufacturing shop was the cradle of the British machine-tool industry. Central in early Victorian lockmaking and manufacturing, he influenced almost every mechanical trade of the time. Like Henry Ford, his influence was probably greater for the manufacturing processes he developed, than the product itself. He took out his first patent on a safety lock (1784) and in 1795 patented his hydraulic press, known as the Bramah press, used for heavy forging. He devised a numerical printing machine for bank notes and was one of the first to suggest the practicability of screw propellers and of hydraulic transmission. He invented milling and planing machines and other machine tools, a beer-engine (1797), and a water-closet.