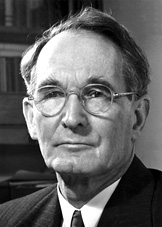 Percy Bridgman was an American physicist who won the 1946 Nobel Prize in Physics for his investigation of substances at very high pressures. His work led to the production of synthetic diamonds (1955). In the philosophy of science he championed the view that scientific terms are only meaningful if they can be given "operational definitions." His books include The Nature of Modern Physics (1927); his collected papers were published in 1964. From 1919 he was a professor at Harvard University.