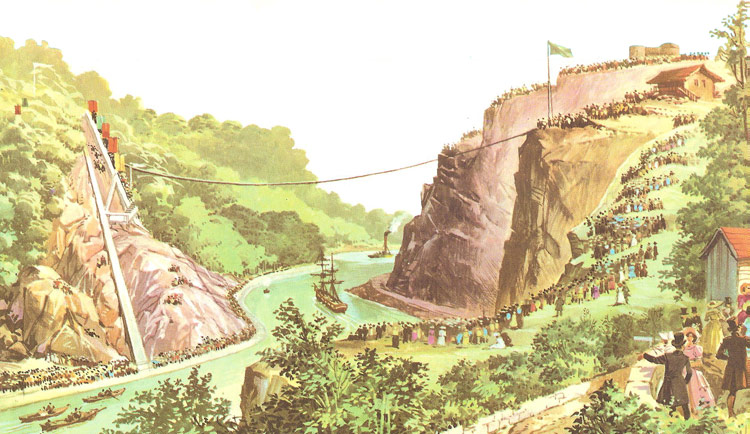 Laying the foundation stone of the Clifton Suspension Bridge in 1836. 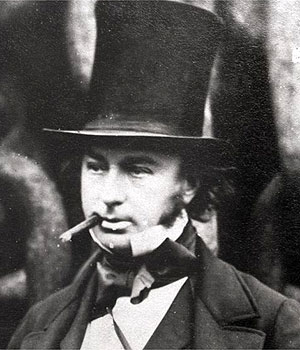 Isambard Brunel was a British engineer who pioneered many important construction techniques, designing the Clifton suspension bridge at Bristol, England, laying the Great Western Railway with a controversial 7-ft (1.23-m) gauge, and building iron-hulled steamship, including the giant Great Eastern.

His father, the French-born British engineer and inventor, Marc Isambard Brunel (1769–1849) fled from France during the French Revolution because of his Royalist sympathies. After a short stay in New York he came to England where he spent the rest of his life. He built the world's first underwater tunnel (under the River Thames in London) and devised machinery for the mass production of pulley blocks and army boots.

Isambard Kingdom Brunel was born at Portsmouth and, in 1823, after two years spent at the College Henri Quatre, in Paris, entered his father's office. In 1825 his father was commissioned to construct a tunnel beneath the River Thames from Wapping to Rotherhithe and young Brunel was made resident engineer in charge of the scheme. After toiling for three years, during which the river broke through the roof on several occasions, the project was abandoned. Work was resumed much later and the tunnel, which is still used for carrying a branch of London's Underground Railway, was completed in 1843.

In 1829–31, Brunel planned the Clifton Suspension Bridge, work on which began in 1835. Unfortunately the money for building the bridge ran out and Brunel never lived to see it completed. (It was finished in 1864, five years after his death). In 1833, Brunel was appointed chief engineer of the newly founded Great Western Railway, a post he was to hold for 13 years. It was his responsibility to design and construct the first rail route from Paddington, London to Bristol. Three of the outstanding achievements on the line are the Hanwell Viaduct, the bridge at Maidenhead, and the Box Tunnel. This tunnel, over two miles long, was the longest that had ever been built, and many people thought that they would be suffocated in it! Brunel became an expert in designing bridges and excavating tunnels.


Brunel and the Great Western Railway

To make tunneling safer he invented the shield. This enabled the workmen to dig out one section of the face at a time. They gained access to the various sections of the face through doors in the shield and as the shield incorporated its own roof supports there was less danger of roof falls.

Not only did Brunel excel as an engineer – he was also quite successful in negotiating personally with landowners. Although it would probably enhance the value of their property, many landlords were bitterly opposed to railways being built across their land. In consequence, enormous fees had often to be paid for the land on which the railway was built. Costly diversions were also necessary to avoid some estates. Nevertheless Brunel succeeded in building lines with smooth curves and, as far as possible, gentle gradients.

On the basis of sound theoretical reasoning Brunel adopted a broad gauge (7 feet between rails instead of 4 fee. 8½ inches used elsewhere in Britain) for the Great Western's tracks. He claimed that this made for safer, faster, and smoother traveling. However, it made the interchange of traffic between the Great Western and other railways very difficult. The 'Battle of the Gauges' persisted for many years, but eventually in 1892 the Great Western gave in and adopted the standard gauge.

To extend the line further to the west, Brunel designed a paddle steamer to be used for regular runs across the Atlantic Ocean. Called the Great Western (1838), this vessel completed the first transatlantic run by a steamship in 1838, taking 15 days for the voyage. Brunel designed two more ships, the Great Britain (1845), the first ocean screw-steamer, and the Great Eastern, the largest ship in the world at that time. The Great Eastern was built under his sole direction and launched in 1859 a few days before his death, brought on by overwork.

Among the outstanding bridges which Brunel designed was the Royal Albert Bridge which carried the railway over the river Tara at Saltash in Cornwall. But ill-health prevented him being present when this great bridge was opened by Prince Albert in 1859.

Brunel designed the Clifton Suspension bridge across the Avon, but did not live to see it erected. He was also involved in the improvement or construction of docks Bristol, Monkwearmouth, Cardiff, and Milford Haven, among others.

Brunel was made a Fellow of the Royal Society in 1830 at the very young age of 24. On Sep 5, 1859, while supervising engine tries of the Great Eastern, he broke down, the result of overwork and stress. He died ten days later.