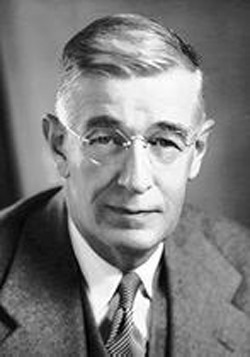 Vannevar Bush was one of the most powerful members of the American scientific and technological elite to emerge during World War II. An aeronautical and electrical engineer on the faculty at the Massachusetts Institute of Technology, Bush lobbied to create and then headed the National Defense Research Committee in 1940 to oversee science and technology in the federal government, including the initial stages of the atomic bomb project. Later, the Committee's name was changed to the Office of Science Research and Development and Bush used it as a means to build a powerful infrastructure for scientific research in support of the federal government. He was president of the Carnegie Institution (1938–55), and remained a strong force in shaping post-war science and technology by serving on numerous federal advisory committees and preparing several influential reports.

In the 1930s Bush and some of his students developed the Differential Analyzer, which was one of the first analog computers.