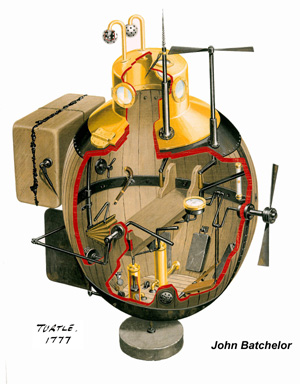 David Bushnell was an American inventor whose one-man submarine, Turtle, was used against British warships during the American Revolutionary War, but to little effect. Built in 1775, its intended purpose was to break the British naval blockade of New York harbor. With slight positive buoyancy, Turtle normally floated with approximately six inches of exposed surface. It was powered by a hand-driven propeller. The operator would submerge under the target, and using a screw projecting from the top of Turtle, he would attach a clock-detonated explosive charge.