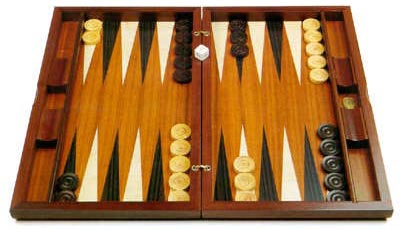 Backgammon is a gambling game for two in which each player seeks to get a set of pieces from one side of the board to the other, while trying to prevent the other player from doing the same. The distance that a piece can be moved at each turn is determined by the throw of dice.

Backgammon has roots stretching back 5,000 years. From Mesopotamia, versions of it spread to Greece and Rome as well as to India and China. The rules of the modern form of the game were largely established in England in 1743 by Edmond Hoyle but benefited from a crucial modification that emerged in American gambling clubs in the 1920s. This final innovation, which added a new level of subtlety, is known as the doubling cube.


How the game is played

Backgammon is played with two sets of 15 checkers: one player has black, the other white. The players' checkers move in opposite directions on a board with 24 spaces or points. Each player's goal is to be the first to bring all their own checkers "home" (into their own quarter of the board) and then "bear them off" (remove them from the board altogether). The movement of the checkers follows the outcome of a roll of two dice, the numbers on the two dice constituting separate moves. The actual amount that changes hands at the end of the game can be more than the initial stake. For instance, in certain winning positions called gammon and backgammon, the stake is doubled or trebled, respectively. The other way the stake can change is by means of the doubling cube mentioned above. If one of the players thinks that she is in a winning position, she can turn the doubling cube and announce a double, which means that the total stake will be doubled. If her opponent refuses the double, he immediately loses his (undoubled) stake and the game is finished. If he accepts the double, the stakes are doubled and, as a compensation, the doubling cube is handed over to him and he gets the exclusive right to announce the next double. (He is now said to own the cube.) If the luck of the game changes so that he later judges that he is now winning, he'll be in a position to announce a so-called redouble, which means that the stake is doubled again. If the first player refuses the double, she now loses the doubled stake; if she accepts, the game goes on with a redoubled stake, four times the original value. There's no limit to how many times the stake can be doubled, but the right to announce a double switches from one player to the other every time it's exercised. (Initially either player can double – no one owns the cube.) This aspect of the game adds greatly to the variety of tactical possibilities and problems.