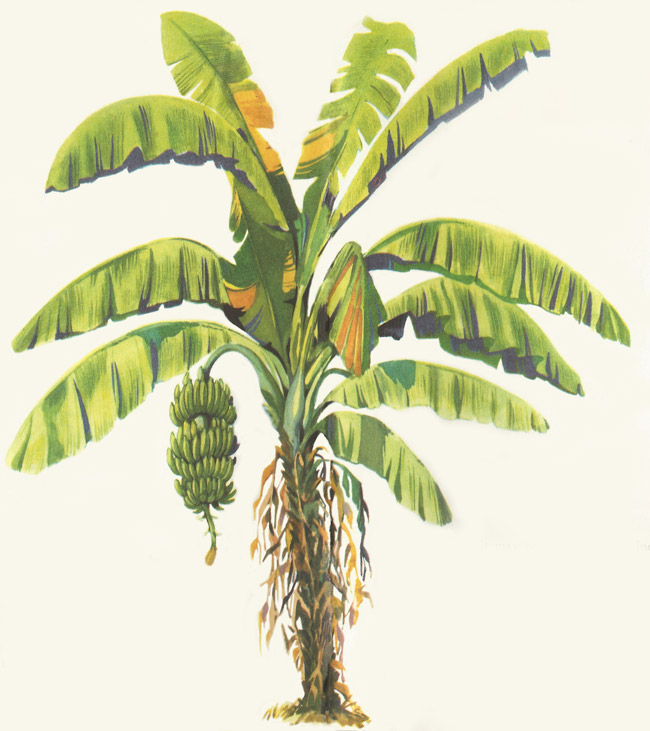 A banana plant with the fruit still unripe. 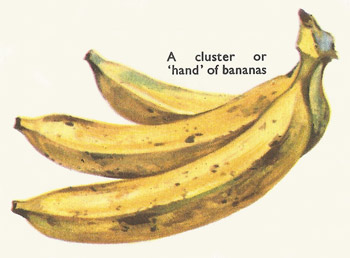 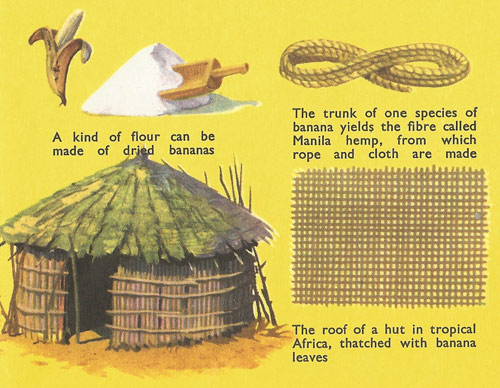 The banana is a tropical plant, and its original home is in southeast Asia and the Indonesian region. There the wild banana grows in the forest; its small fruit, filled with acid pulp and hard, stone-like seeds, is almost uneatable. From this wild plant edible bananas were produced by selection and cultivation in very early times, and by the beginning of the Christian era the fruit was already well known in Asia and the Mediterranean countries.

When the Spaniards settled in South America in the 16th century they planted bananas there and found that they grew very well. Now many of the large banana plantations are in South and Central America and in the West Indies. They are also grown in the Far East, their original home, but almost entirely for local consumption.

In a hot, moist, tropical climate the plants grow, flower, and bear fruit continuously. The work of planting, cultivating, spraying against pests, and gathering the fruit goes on all year. The bananas are picked and shipped when they are still green, and ripen in storage or during transport.

The banana needs a climate with a lot of rain, but it can be grown in dry areas if the soil is suitable. Here irrigation is used in an uncommon way; the plants are given artificial rain by piping the water all over the plantation and then spraying it from the tops of high vertical tubes, each of which will water about three acres.

The strangest thing about a banana plant is that its stem is entirely underground. It runs horizontally under the soil, giving out roots below and buds or shoots which grow upwards. Stems of this kind are called rhizomes; the iris is a familiar garden plant which also has them. The plant appears to have a trunk like that of a tree or bush, but this really consists of overlapping leaf-bases. It is so soft and sappy that the banana plant can easily be felled with a single blow from a machete or cutlass, although it may be as much as 10 in thick.

Bananas are never grown from seed, but are propagated by planting pieces of the rhizomes. From the buds in these (which are like the 'eyes' of a potato) new plants grow up amazingly fast to a height of about 20 to 30 ft. In good conditions they reach their full height and bear fruit in less than a year. Each plant bears a single bunch of fruit and then dies down, but the underground rhizome from which it sprung continues to send up shoots year after year.

After about 10 months' growth an inflorescence forms at the top of the plant. The flowers are arranged on it in semi-circular groups called whorls, and each whorl is covered by a pink, fleshy bract, which falls off when the fruit begins to form.

As the flowers develop the flower stalk lengthens, so that the whorls grow farther apart and start to bend downwards.

As the flowers develop into fruit they bend upwards and form clusters (corresponding to the whorls of flowers) which are called 'hands'. Each of these hands has from 10 to 20 'fingers' – that is to say, bananas. All the hands on a stem form a single bunch, which may contain 200 bananas and weigh 80 to 90 lb. Harvesting these enormous bunches s very heavy work.

Botanically, the fruit is classed as a berry. Wild bananas contain seeds, but cultivated ones practically never do, although vestiges of seeds are present; these are the little black dots in the center of a banana which we can clearly see when we cut it across.

The plant consists of about 10 leaves whose bases form the trunk. The leaves themselves are enormous – about 6 or 7 ft long and from 1 to 2 ft wide. They grow outwards in a crown like the leaves of a palm tree. They rarely stay whole for long, as the wind soon splits them from the edge to the mid-rib, along the line of the vein.

There are some 200 varieties of bananas belonging to about 30 species. The two most important species of banana are:

This is the common yellow banana that we buy today. The flesh is soft and sweet and is usually eaten uncooked. It is also called the Jamaica banana.

Known as the plantain, this species has much larger fruit than the Jamaica banana. This fruit is up to 12 in long, and is used as a staple food (as western peoples use bread and eastern peoples use rice) in some tropical American countries. The flesh is firm and starchy, and is cooked before eaten.


Bananas as a food

There are several reasons why bananas are grown and sold in such huge quantities: