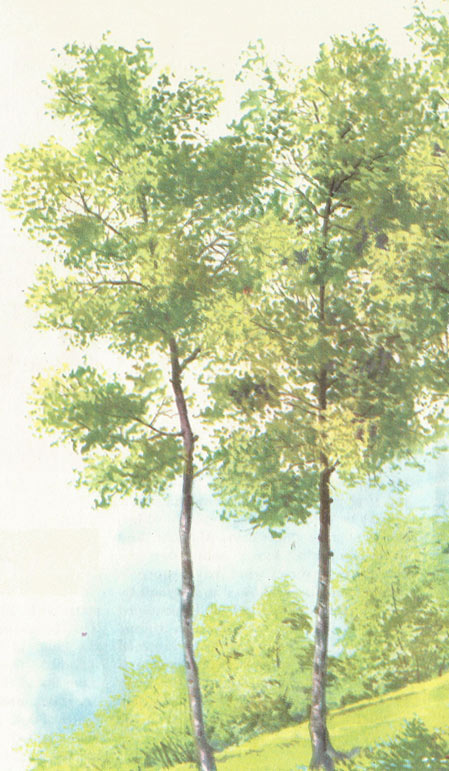 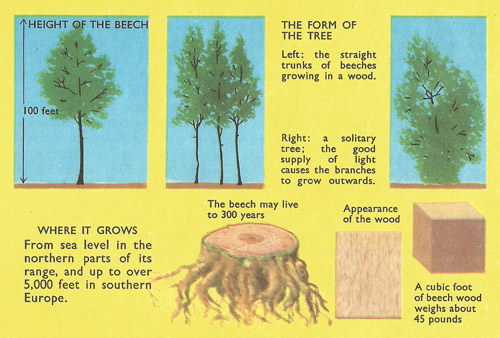 Facts about the beech.

Although beeches are found in many places in England and Wales, they only form extensive woodlands on chalk and limestone formations, and especially on the Cotswold Hills and the Chiltern Hills of Buckinghamshire and southern Oxfordshire, where they are under a system of forest management known as the 'selective system'. The woods are never completely felled, but a certain number of trees of different sizes are taken out at intervals, and the loss is made up by the natural growth and self-sowing of the remaining trees. The special name 'hanger' has been given to beech woods growing on the steep slopes of the downs.

Beech trees form one of the most pleasant of all woods to walk in. The foliage is so dense that not much light penetrates to the ground, and there is seldom a thick undergrowth. In spring the leaves are a beautiful pale green which darkens as the summer advances. In autumn they turn bright russet brown before falling, so that during that season the beech forms the most beautiful of all woods.

Beeches are often grown as ornamental trees in gardens, or to form avenues. The copper beech, a variety of the common beech, is one of the most popular; its leaves are a deep purplish-brown. The maiden-hair beech and pyramidal beech are other ornamental varieties.

The beech is a fine tree that grows massive with age. The bark is grayish in color and smooth, and it remains smooth however old the tree. It is for this reason that beeches, more than any other trees, are disfigured by people who carve on them their names, initials, and other uninteresting items of information. Beeches attain a height of 100 ft in about that number of years and continue to increase in girth for a long time afterwards.

Beech leaves are ovate (egg-shaped) and entire – that is, not toothed at the edge. They appear in April, and at first are pale green and covered with silvery-white down, which serves to protect them from early frosts. During winter the long, pointed leaf-buds are enclosed in brown scales.

In Central Europe there are large forests of beech growing from about 1,000 ft above sea level to 5,000 or 6,000 ft in the mountains; the further south you go the higher the trees flourish. In the north they grow in the lowlands, and in Britain they do not extend much beyond northern England. The oldest and finest beech forests are now found in the eastern Alps. In the Caucasus and western Asia the Fagus sylvatica is replaced by Fagus orientalis.