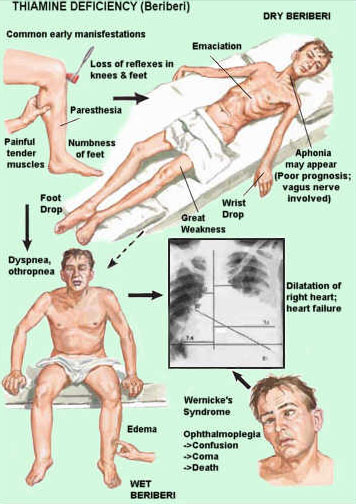 Beriberi is a deficiency disease caused by lack of thiamine (vitamin B1); it may occur in malnutrition, alcoholism, or as an isolated deficiency. Neuritis leading to sensory changes, and foot or wrist drop, palpitations, edema, and heart failure are features.

There are two major types of beriberi:

Beriberi is rare in developed countries because most foods are now vitamin-enriched. A person eating a normal, healthy diet should get enough thiamine. Today, beriberi occurs mostly in patients who abuse alcohol. Drinking heavily can lead to poor nutrition, and excess alcohol makes it harder for the body to absorb and store thiamine.

A rare condition known as genetic beriberi is inherited (passed down through families). People with genetic beriberi lose the ability to absorb thiamine from foods. This can happen slowly over time and symptoms occur when the person is an adult. However, because doctors may not consider beriberi in non-alcoholics, this diagnosis is often missed.

Beriberi can occur in breast-fed infants when the mother's body is lacking in thiamine. The condition can also affect infants who are fed unusual formulas that don't have enough thiamine.

Getting dialysis and taking high doses of diuretics increase the your risk of beriberi.

Symptoms of dry beriberi include:

Symptoms of wet beriberi include:


Exams and tests for beriberi

A physical examination may show signs of congestive heart failure, including:

A person with late-stage beriberi may be confused or have memory loss and delusions. The person may be less able to sense vibrations.

A neurological exam may show signs of:

The following tests may be done:

The goal of treatment is to replace the thiamine your body is lacking. This is done with thiamine supplements. Thiamine supplements are given through a shot (injection) or taken by mouth. Other types of vitamins may also be recommended.

Blood tests may be done after you are given thiamine supplements to see how well you are responding to the medicine.

Heart damage is usually reversible, and a full recovery is expected. However, if acute heart failure has already occurred, the outlook is poor.

Nervous system damage is also reversible, if caught early. If it is not caught early, some symptoms (such as memory loss) may remain even with treatment.

If a patient with Wernicke's encephalopathy receives thiamine replacement, language problems, unusual eye movements, and walking difficulties may go away. However, Korsakoff syndrome (or Korsakoff psychosis) tends to develop as Wernicke's symptoms go away.