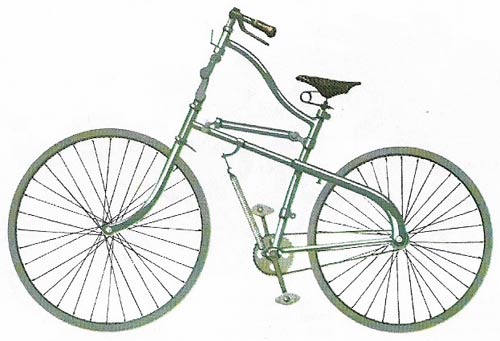 Fig 1. The Whippet of 1885 was designed by Lindley and Briggs. It had a pivoted and sprung frame designed to make the handlebars, saddle, and pedals independent of the rest of te frame and wheels. 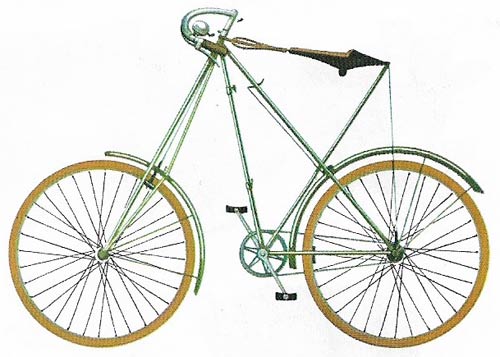 Fig 2. The Dursley Pederson bicycle of 1893 was designed by M. Pederson and built at Dursley in England. The frame members were of twin narrow-secion tubes, side by side for rigidity, giving a lighter frame. 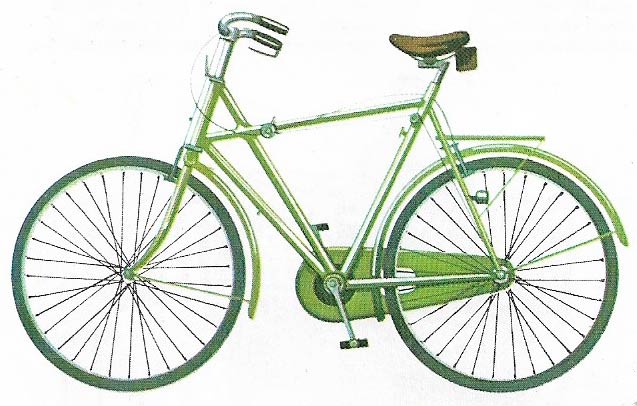 Fig 3. The Rayleigh Safety bicycle of 1901 had an all-steel frame joined by a new brazing process using pressed steel sockets brazed to the frame tubes by dipping the joints in molten brass. 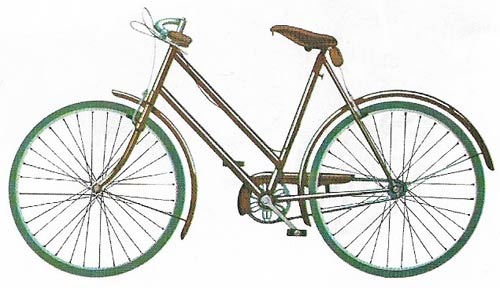 Fig 4. The Swift ladies' bicycle of 1926 had no cross-bar on the frame, making it easier for a woman wearing a skirt to get on and off. The lightweight frame was an advance over early heavy designs. 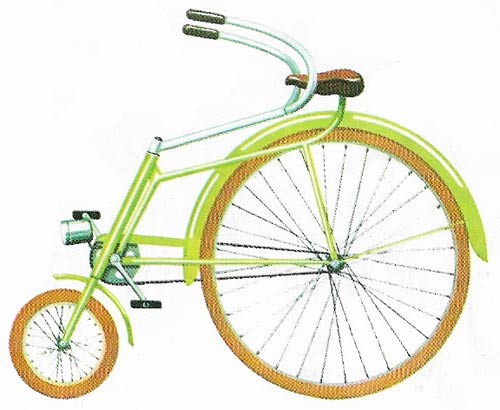 Fig 5. The Velocino bicycle, made in Italy in the mid-1930s, was an attempt at a compact design that was easy to store and carry. Its inventors alsoclaimed it to be easier to dismount in an emergency. 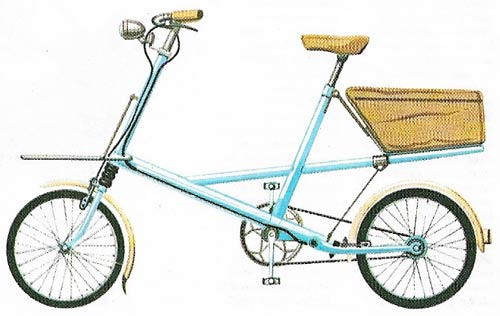 Fig 6. The Moulton bicycle, produced in the UK in 1962, had small wheels, rubber suspension, and a low center of gravity. The frame could be adjusted to "fit" the build of almost any rider and was strong enough to carry heavy loads. 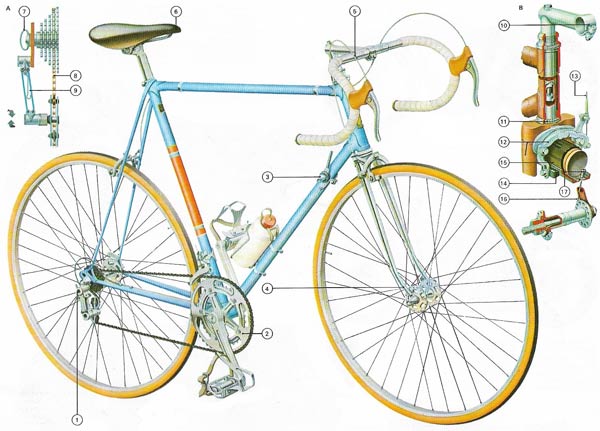 Fig 7. A modern racing bicycle has a shortwheelbase

Bicycles have been a popular means of transport and recreation in many countries since the late 1800s. Some modern bicycles feature recent innovations such as disk brakes, front fork suspension, and the use of carbon fiber to add strength while reducing overall weight.

The history of the bicycle begins with non-powered machines developed in France in the late 1700s. In 1791 the Comte de Sivrac built his celerifere. It was a wooden machine consisting of two wheels in line joined by a bar that carried a seat. The rider straddled the bar and "walked" the machine along. Similar machines were made by J. Nicephore Niepce (1765–1833) (also the inventor of an early photographic process) in 1816 and by the German Baron Karl von Drais a year later. Drais' Laufmaschine soon became popular in Britain and Germany as the draisine or hobby-horse.

In 1839 the Scotsman Kirkpatrick Macmillan produced a "powered" hobby-horse propelled by pedals at the front which worked backwards and forwards driving connecting rods to turn the rear wheel. Rotating pedal-cranks, driving the front wheel directly, were introduced by the French brothers Pierre and Ernest Michaux in about 1861. They called their machines Velocipedes and within four years were manufacturing 400 bicycles a year. By 1869 bicycle racing was established on the roads of France.

The "ordinary" or "penny-farthing" bicycle had a large front wheel driven directly by pedal-cranks and a small rear wheel. Invented in 1871 by the Englishman James Starley (1831–1881), it rapidly became the most popular type of bicycle. The size of the large wheel was chosen to suit the length of the rider's legs and varied from 1 m (39 in) to 1.5 m (59 in) across.

The first chain-driven machine was built in 1874 by H. J. Lawson. Pedal-cranks mounted on the frame turned a large sprocket wheel which drove an endless chain round a smaller sprocket on the rear wheel. Bicycles again had wheels of roughly equal sizes. The Rover safety bicycle of 1885 was mass produced and within a few years completely replaced the penny-farthing. All these early bicycles had solid rubber tires mounted on steel-rimmed wheels.

A milestone in the history of the bicycle came in 1888 when John Dunlop (1840–1921) invented the air-filled or pneumatic tire. The diamond-shaped frame became standard and there were no major changes in bicycle design for the next 70 years. In the 1960s various manufacturers produced small-wheeled bicycles — some of which could be folded to fit into the boot of a car – for town use. Earlier unusual designs included the tandem, a long-framed bicycle for two riders, and the three-wheeled tricycle which became important as the type of machine into which Karl Benz (1844–1929) and Gottlieb Daimler (1834–1900) fitted petrol engines to make the first motor cars in 1885.

A modern bicycle has mudguards, electric lamps powered by batteries or a dynamo and lever or calliper brakes acting on the rims of both wheels (Fig 7). It may have variable gear ratios and a guard to enclose the chain and transmission. Accessories include extra carrying capacity in the form of a rear-mounted rack, a basket in front of the handlebars and a saddlebag or a pair of panniers mounted on each side of the rear wheel.

The frame is generally made of seamless steel tubing brazed or welded together. In the brazing process pre-cut lengths of tubing are fitted over angled sockets and secured in place with molten brass. In welding there are no sockets and the tubes are joined with molten steel to give a joint stronger than the tubes themselves. Using special light alloys manufacturers can make racing bicycles weighing as little as 7 kg (15 lb).

Between 24 and 40 wire spokes join the wheel hub to the rim. The rim end of each spoke is threaded and a nut or nipple is screwed on to it to keep the spoke in tension. The rim may be made of aluminium alloy, stainless steel or chromium plated stainless steel. Hard rubber brake-blocks, worked by levers (called stirrups) or callipers (which act like pincers to nip each side of the wheel) press on the rim for braking. An alternative type of brake acts by pressing inside the hub of the rear wheel and is brought into action by back-pedalling. The rear wheel of a bicycle rotates faster than the large sprocket wheel turned by pedalling. There are generally about 48 teeth on the large sprocket wheel and about 18 on the smaller rear sprocket. This provides a gear ratio of about 2.66 to 1. Variable gears allow different speeds for a constant pedal-ling effort. There are two main types. In a derailleur gear there are up to six rear sprockets of different sizes plus up to three on the cranks to provide a variety of gear ratios.

An epicyclic gear, developed by Sturmey and Archer, is more complicated. A small cog called the sun wheel inside the rear limb is rotated by the rear sprocket. A ring of teeth line the inside of the hub and the drive is taken to these from the sun wheel via a set of planet-wheel cogs. Three different gear ratios are available. Sturmey-Archer and derailleur types can be combined on one hub to provide the rider with eight gears.