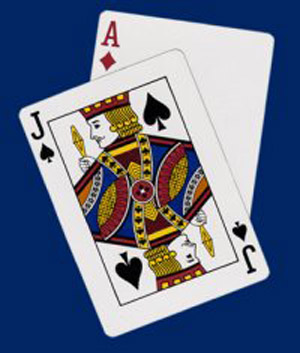 Blackjack, also known as twenty-one, is the most popular casino game in the world and the only such game with a fluctuating probability: the odds of winning change with the makeup of the deck. The cards two to nine have a numerical value equal to the number printed on the card. Tens and all face cards (jack, queen and king) have the value of 10. Aces may be counted as either 11 or one. A dealer plays against one to seven players. Every player and the dealer receive initially two cards each, dealt by the dealer. Each player's hand is played against the dealer's hand only. If a player's hand has a value closer to 21 (without going over) than the dealer's hand, the player wins.

The best possible hand is known as a blackjack (21 in the first two cards) and consists of an ace and a ten-valued card (10, J, Q, K). The payout for a blackjack is 3-to-2: the player is paid three chips for every two chips bet. When both the player and the dealer have blackjacks, it is a normal tie (push) situation and the player retains the initial bet. The player has several choices after receiving the first two cards. (1) Hit or draw: take one or more cards to add-up to a better hand. (2) Stand: stop taking more cards. (3) Double down: double the initial amount (in cases considered more favorable). (4) Split pairs: if the two cards are equal in value they may be played in two separate hands. The dealer must draw until his hand adds up to 17 or more. Both the player and the dealer can go over 21, a situation known as bust. The player loses the bet immediately. The dealer plays his hand last, after all the players at the table. This rule creates the so called house edge. John Scarne1 was the first to calculate the house advantage at blackjack: 5.9%. However, the house edge can be cut to around 1% if the player follows certain rules. The set of rules known as basic strategy make blackjack one of the fairest games of any kind, almost as fair as coin tossing.

In 1962, Edward O. Thorp, an IBM computer scientist, published Beat the Dealer,2 which introduced a winning method called card counting. This method considered the ten-valued cards and the aces as positive, and the cards 2 to 6 as negative. If the net value of the remaining deck was positive, the player must increase the bet accordingly. The method had visible results when only one deck was used and very few cards remained in the deck. Casinos responded by changing the rules dramatically. The penetration was introduced: not all the cards in the deck are played. Shuffling is done unexpectedly. Also, most casinos introduced the multiple deck blackjack.