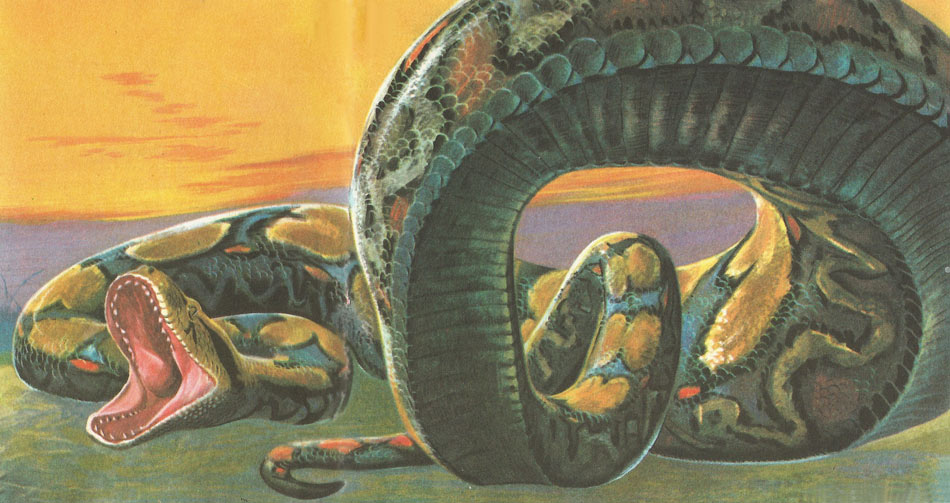 A boa constrictor ready to defend itself.

Internal organs of the boa.

Skeleton of the boa. 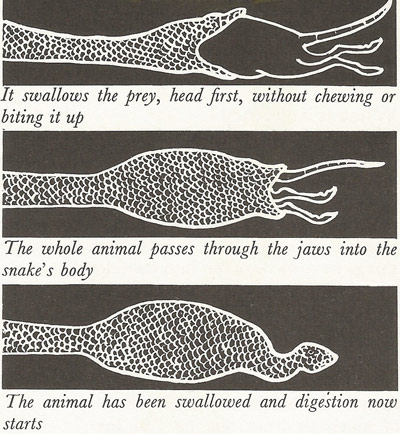 How a boa eats. 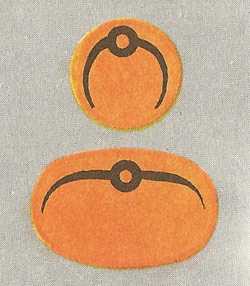 The ribs are not attached to a breast-bone in front, and can open outwards. 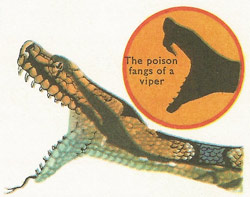 The teeth of the boa are successively smaller from the front backwards. There no poison fangs. 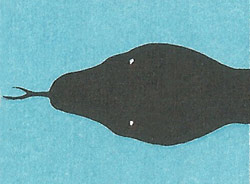 The forked tongue of the boa.

The term 'boa constrictor' is often used to described any very large snake that kills its prey by crushing it in its coils. In fact this snake (its scientific name is Constrictor constrictor) is not so very big; it usually grows to about 11 ft. This is quite a normal size for a snake, although the anaconda of South American may exceed 20 ft, and the Asiatic regal python grows to as much as 30 ft.

The true boa constrictor is well-known and is useful to study as an example of the Boidae, the family of boas and pythons, which are the largest snakes existing. None of these is venomous, and all kill their prey, as the name constrictor implies, by coiling round it and squeezing it to death. The boas are mainly American; the pythons inhabit Africa and Asia, and are also found in Australia.


Where and how the boa lives

The boa constrictor inhabits the tropical forest of Central and South America. In spite of the alarming stories told of it, it does not attack human beings. It could not possibly eat a man (since it must swallow its prey whole) and so has no reason for attacking one. It feeds on quite small animals, for which it lies in wait. If a monkey strays within reach there is a lightning grab of the wide, needle-toothed jaws, the great coils slide round the victim, and in a minute the monkey's breath and life are squeezed out of it. The snake will also use its great constricting power in defense; a fully grown boa is too strong for a man to tackle safely alone.

All snakes swallow their prey whole and their mouths can be stretched extremely wide open. After a boa has had a meal it remains in a sleepy, inactive state for some hours while its powerful digestive juices attack and dissolve the prey, skin, bones, and all. A snake discovered in this condition is helpless. It can neither crawl away nor defend itself.

The boa constrictor does not lay eggs, as most snakes do, but bears its young live, five or six at a time. Its large relative, the anaconda, may produce a litter of as many as 40 young snakes, and in one case an anaconda produced 72 young snakes, each over 3 feet long.

The anatomy of the boa is similar to that of other snakes with one important exception: the boa (and all the other Boidae) has two lungs, whereas most snakes have only one. In such a thin, narrow body one lung works better than two; in this respect the Boidae are less advanced than other snakes.

The heart, as in most reptiles, is simple, only the atria being divided by a septum. The digestive organs are very well developed and efficient; as the prey is swallowed whole, skin, bones, and everything has to be digested. The brain is small.

This is the boa's extraordinary skeleton. It has a great number of vertebrae and ribs, and it is movements of its ribs against the ground that the snake crawls. An interesting feature of the boa's skeleton is the presence of rudiments or traces of the pelvic girdle. These have the form of two rods of bone ending in external claws, which represent the thigh-bones or femora, of animals with limbs. They show that snakes have evolved from an ancestor with legs, probably a creature something like a lizard. In most other snakes all traces of these bones have been lost.

The teeth of the boa are set not only in the upper and lower jaw-bones but also in the bones of the palate. They are shaped like backward-pointing hooks; they serve to hold the prey and, by backward and forward movements of the jaws, to force it down the snake's throat.

The tongue is forked and can be put in and out, even when the mouth is closed, through a notch in the upper lip. It is an organ of touch and 'smell' rather than that of taste; the snake feels its way about with its tongue.