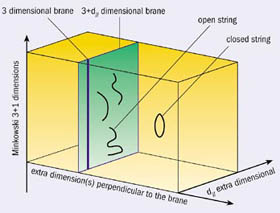 A brane is any of the extended objects that arise in string theory. A 0-brane is just a point particle, a 1-brane is a string, a 2-brane is a membrane, a 3-brane has three extended dimensions, etc. More generally, a p-brane has p spatial dimensions.

In the low energy effective supergravity theory of a string theory, p-branes appear as black holes, where the singularity is not just a point but a p-dimensional surface.