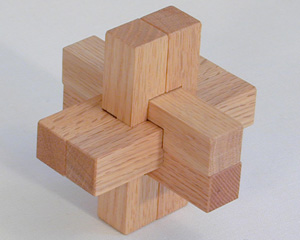 A burr puzzle is an interlocking wooden puzzle that, when put together, typically looks like three rectangular blocks crossing each other at right-angles. Little is known about their early history, but they were certainly produced both in Asia and Europe in the 18th century. They acquired the name Chinese puzzles, probably because so many of them were produced in the Orient from the early 1900s. In 1928, Edwin Wyatt published Puzzles in Wood,1 the first book devoted to the subject, and introduced the term "burr puzzles" because of the likeness of the assembled toy to a seed burr.

Burr puzzles consist of three (the smallest number), six (the commonest number), twelve, or other numbers of pieces that are notched in various ways so as to pose a challenge to the would-be assembler. The earliest known reference to the popular six-piece burr appears in a Berlin catalog of 1790, but not until 1917 was a patent taken out on a particular design. In 1978, William Cutler proved that 25 possible notchable pieces can be used to make solid six-piece burrs and that they can be put together in 314 ways. (Pieces are considered notchable if they can be made by a sequence of notches that are produced chiseling out the space between two saw cuts.) Cutler also proved there are 369 general pieces from which solid burrs can be and that these can be assembled in 119,979 ways. One particular form of burr has six identical pieces, all of which move outward or inward together. Another form, with flat notched pieces, has one piece with an extra notch or an extended notch that allows it to fit in last, either by sliding or twisting, although this isn't initially obvious. This form is sometimes made with equal pieces so that it can only be assembled by force, perhaps after steaming, and it then makes an unopenable money box.