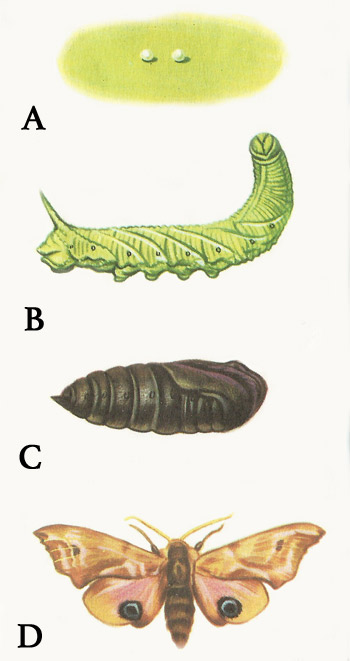 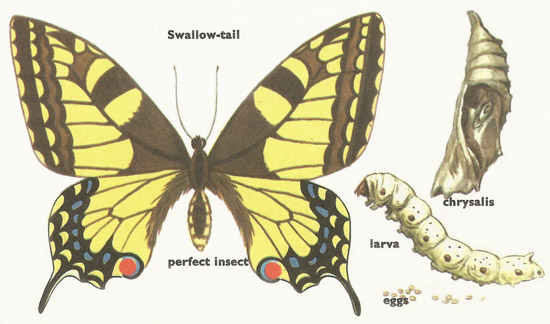 Butterflies and moths belong to a very diverse order of animals, the insects, which also includes bees, flies, beetles, grasshoppers, etc. More than a million different kinds of insects are known to inhabit the Earth (there are many still to be discovered) of which perhaps a tenth belong to the Lepidoptera, as butterflies and moths are collectively called. This word is derived from the Greek lepis, a scale and pteron, a wing. The minute scales of a butterfly's or moth's wing overlap like tiles on a roof and their color determines that make the wings so beautiful.

Most butterflies and moths feed on the nectar of flowers, which they suck up through a long tube or proboscis. Butterflies fly in the day time and can be distinguished from moths by the feelers or antennae, which are knobbed at the tip. Those of the moths are variously formed.

Both butterflies and moths are far more numerous and varied in tropical lands than in countries with a temperate climate. In the UK, there are somewhat over 2,000 species of which only about 70 are butterflies the remainder being moths. Among the more prominent of the British species are:

Emperor Moth.. A large, handsome moth found mainly in heath country, where it is not uncommon. It has beautiful eye-like markings on all four wings.

Swallow-tail Butterfly. A beautiful insect, now quite confined in Britain to East Anglia. You may see it if you go for a holiday on the Norfolk Broads.

Garden Tiger Moth. One of Britain's most brightly colored moths and very common. Its caterpillar is hairy and sometimes called the 'woolly bear'.

Red Admiral Butterfly. A familiar summer butterfly. Many of the ones seen in the UK have flown over from continental Europe.

Brimstone, Orange-tip, and Small Tortoiseshell Butterflies. These are the first butterflies to be seen in the spring. The Orange-tip has passed the winter as a chrysalis, the other two hibernate as butterflies.

Morpho Butterfly. These glorious creatures are found only in South America; a kind of jewelry is made from their wings.

Large White Butterfly. A very common insect and unfortunately a pest, for its caterpillars devour cabbages.

Deaths-head Hawk Moth. So called from the skull-like markings on its thorax. This is a migratory moth and flies to Britain from North Africa; it has the peculiar power of squeaking loudly. Its caterpillar feeds on potato leaves.


Metamorphosis of butterflies and moths

Like many other insects, butterflies and moths pass through distinct stages in their life history. The first is the egg (laid by the parent butterfly) and from this hatches a tiny grub-like creature called the larva or caterpillar. This feeds, usually on leaves of some kind, and grows very fast, in fact the whole of the insect's growth takes place in this stage. All caterpillars have three pairs of little jointed legs in front and usually five pairs of unjointed legs or claspers behind; some moth caterpillars have less than five. Some kinds of caterpillars do a great deal of damage by eating cultivated plants; those of the common White Butterflies feed on cabbage. One very small species of moth is a serious pest because its larva feeds on woollen fabrics -- the Clothes Moth. As caterpillars grow they change their skins from time to time, creeping out of the old skin and revealing a bright new one underneath.

When it is fully grown the larva turns into a pupa or chrysalis. This is a resting stage; it has no legs nor any power of movements except a slight wriggle. When a butterfly caterpillar is about to 'pupate' it hangs itself up and, after a time, its skin splits and reveals the pupa underneath. All caterpillars can spin silk by drawing a thread of gummy liquid out of a gland near the mouth, which hardens directly it meets the air. Many moth caterpillars surround themselves with a little case of silk before they pupate; it is called a cocoon and acts as a protection for the pupa. It is at the time of pupation that the greatest change takes place. Almost the whole of the larva's tissues are broken down to liquid form and then built up again to form the winged insect, which lies dormant inside the pupa until the time comes for it to hatch into its fourth and final stage. When this happens the shell of the pupa splits and the butterfly or moth crawls out. At first the wings are small and crumpled, but they quickly expand, and after a few hours are dry and hard enough for the insect to fly. When the female butterfly lays her eggs instinct guides her to place them on the kind of plant that will correctly nourish her caterpillar offspring.