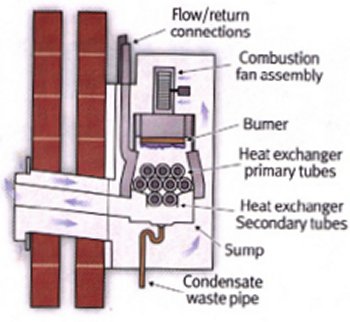 A condensing boiler is a type of boiler that uses an additional set of heat exchanger tubes to achieve very high efficiencies (typically more than 90 percent). The term "condensing" comes from the fact that heat is recovered successfully from the flue gases such that they are cooled to a temperature where the water vapor starts to condense out.

The extra heat exchanger ensures that the hot exhaust gases lose much of their energy to pre-heat the water in the boiler system. Water vapor produced from the combustion condenses into a liquid state releasing its latent heat of vaporization. The condensate from this process has to be piped away.

From the point of view of energy saving, it is always better to have a condensing boiler. The initial outlay is greater but is recouped in the long term through lower energy costs.

Condensing boilers have been used in the United States and continental Europe since the 1980s.

It is possible to replace most existing boilers with a condensing boiler, whether they are floor standing or wall hung. Finding a place for a condensing boiler is no harder than placing a conventional boiler. The only addition is the condensate drain.