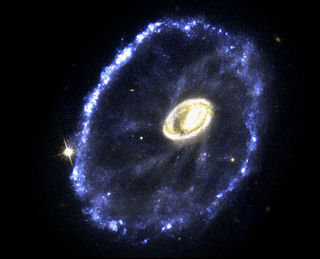 The Cartwheel Galaxy (ESO350-40) is a ring galaxy, lying about 500 million light-years away in the constellation Sculptor, that has been tidally distorted by an encounter with another galaxy into a ring-and-hub structure.

The striking cartwheel appearance is the result of a smaller intruder galaxy having careened through the core of the larger system, which was probably once a normal spiral similar to the Milky Way. Like a pebble tossed in a lake, the collision sent a ripple of energy into space, plowing gas and dust in front of it. Expanding at a rate of more than 300,000 km/h, this cosmic tsunami left a burst of new star creation in its wake. Images taken by the Hubble Space Telescope, including the one shown here, have resolved bright blue knots that are gigantic clusters of newborn stars and immense loops and bubbles blown into space by supernovae. The intruder was almost certainly one of two small galaxies seen near the Cartwheel. The bluer of this pair is disrupted and has new star formation, which strongly suggests it is the interloper. However, the smoother-looking companion has no gas, which is consistent with the idea that gas was stripped out of it during passage through the Cartwheel. The Cartwheel's old spiral structure is beginning to reemerge, as seen in the faint arms or spokes between the outer ring and bull's-eye-shaped nucleus. The ring contains at least several billion new stars that would not normally have formed in such a short time span and is so large – 150,000 light-years across – that our entire Milky Way Galaxy would fit inside it.