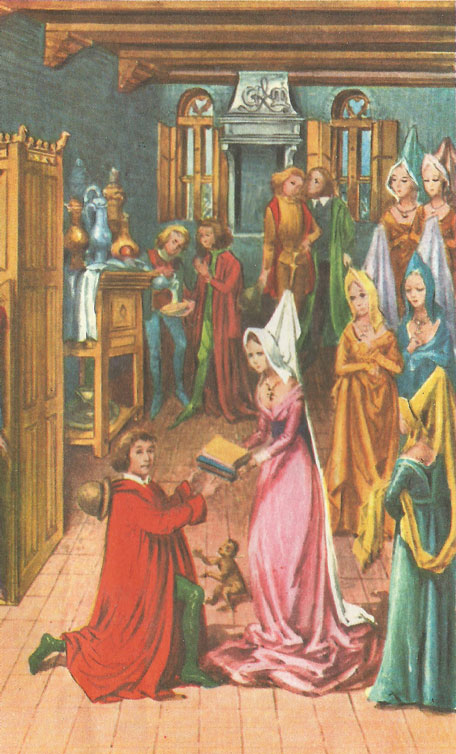 Caxton presenting his first book, The Recuyell of the Historyes of Troye, to Margaret, Duchess of Burgundy. 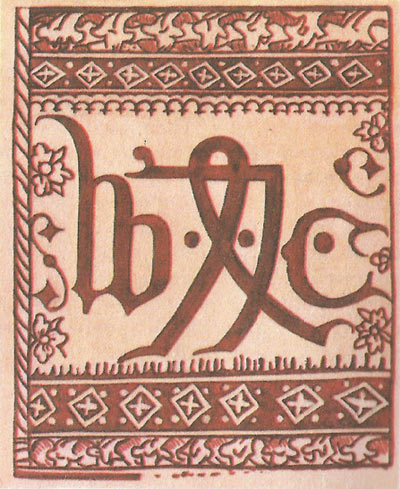 William Caxton's device which showed that he was the printer of a book.

William Caxton, the first English printer, was born in Kent. Nothing is known of his boyhood, but we do know that in 1438 he was apprenticed to Robert Large, a man who was to become Lord Mayor of London in the following year. In 1441, after the death of his master, Caxton moved to Bruges, a center of the flourishing wool trade, with a large English merchant population. Caxton was so well liked there that in 1463 he was elected to be governor of the company of 'Merchant Adventurers in the Low Countries' at Bruges.

Caxton travelled around Europe and must have seen many of the early printed books which were being produced by the thousand in Germany and Italy. The new printed books were cheaper than the very expensive handwritten manuscripts which they were gradually replacing. But they were expensive compared with the prices of books today, and book-learning was not widespread.

In 1471 Caxton entered the service of Margaret, Duchess of Burgundy and sister of Edward IV, who became his patron. In his new post he had time to follow one of his main interests, which was the translation of foreign literary works into English. In the same year he finished his first major translation, and English version of a popular medieval history, The Recuyell of the Histores of Troye, which e dedicated to his patron.

Between 1471 and 1472 Caxton lived in Cologne, where he became friendly with one of several German printers in the city and from him learnt the art of printing. On his return to Bruges he went into partnership with Colard Mansion, one of the townspeople, and they set up a press of their own. Here, in 1475, Caxton published the first book to be printed in English, his translation of The Recuyell of the Historyes of Troye. Caxton printed three or four other books in Bruges, including The Game and Playe of Chesse. He returned to England in 1476 to set up his own press.

Caxton set up the first printing press on English soil in the precincts of Westminster Abbey, near the Chapter House. The first book printed in England, The Dictes and Sayenges of the Phylosophers, was issued there in 1477.

Printers in Europe at this time were largely occupied with printing editions of the classics and theological works in Latin. Caxton had the idea of printing popular books in English in order to reach the wider public. Between 1477 and his death in 1491 Caxton's press produced about 100 different books and broadsides (large sheets of paper printed on one side only), many of them being his own translations of works in French. The most popular book he printed was undoubtedly The Canterbury Tales by Chaucer, which appeared in 1478. In 1481 Caxton produced the first illustrated book to be printed in England, The Myrrour of the World, which contained a number of woodcuts.

Caxton, like other printers of this period, did not print a title-page to his books, and the information which we now find there (the name of the printer, the date and place of publication) appeared in a paragraph right at the end of the book called a colophon. The colophon to the first book printed in England reads: 'Thus endeth this book of the dictes and notable wyse sayenges of the philosophers. . . . Emprynted in this manere as ye maye in this booke see Whiche was fynissed the xviii day of the monthe of Novembre and the sevententh yere of the regne of kynge Edward the fourth.'

During Caxton's lifetime only a handful of printers worked in England. Theodoric Rood printed for a few years in Oxford; a man known as the 'Schoolmaster Printer', whose name we do not know, produced a few books in St Albans; and in London, John Lettau, William Machlinia, and Richard Pynson set up presses.

Caxton died in 1491 and his business passed to another famous 15th-century printer, Wynkyn de Worde. But the number of books printed in England before 1500 was only a small fraction of the number produced in the rest of Europe.

The entries relating to Caxton's funeral still exist among the records of Westminster Abbey:

Books printed by Caxton are very rare, and fetch many thousands of pounds when they are offered for sale. If you are interested in seeing more of his books which are on public exhibition, you should go to the great John Ryland library in Manchester, or to the British Museum in London, where there are usually several Caxtons on display.