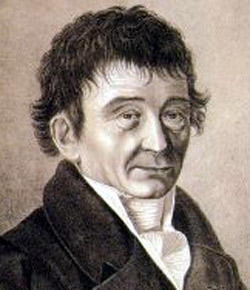 Ernst Chladni was a German lawyer, musician (he was born in Leipzig in the same year as Mozart and died in the same year as Beethoven), and amateur scientist who founded the science of acoustics. While investigating musical tones, he had the inspired idea of making the sounds visible in a solid material. He spread fine sand over a glass or metal plate and set it into vibration with the bow of a violin by scraping the bow along one edge of the plate. The bow would alternately stick and slip in rapid succession on the edge of the plate creating waves that moved across the plate and were reflected from the edges. These reflected waves became superimposed on the new waves coming from the bow edge, resulting in symmetrical patterns of nodal lines where the plate isn't moving. The type of pattern produced on a Chladni plate depends on a variety of factors, including the point or points of support and their location; the point where the bow touches the plate; the frequency of the vibration, which is influenced by the speed the bow; and the shape and other properties of the plate itself.

Chladni was born at Wittenberg and studied law in his native town, and also in Leipzig, where, in 1782, he was made Doctor of Laws. After abandoning his judicial studies for the science of sound, he traveled for ten years through Germany, Holland, France, Italy, Russia, and Denmark, giving lectures on the subject. His writings include works on the theory of sound (1787), and on acoustics (1802 and 1817), on meteors (1820), and on the improving of musical instruments.