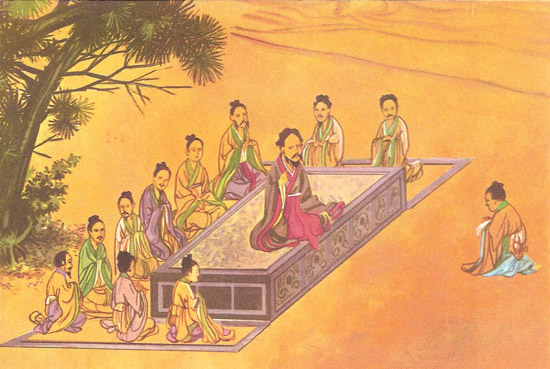 Confucius teaching his followers (painting on silk from Taiwan). 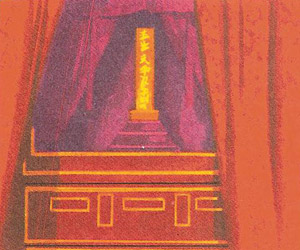 The tombstone of Confucius in the 'Temple of Great Perfection' in Bejing.

A Chinese youth once asked: 'How should a man live a good life?' The answer he was give has come down to us from twenty-five centuries ago. It was this: 'Don't do to others what you would not wish them to do to you.' The speaker of these words had no idea that the western world would have to wait for another five centuries before it heard a similar saying: Thou shalt love thy neighbor as thyself'. The man who answered the boy's question was Confucius. He was to influence Chinese civilization and become one of the most honored thinkers of the Far East.

In Chinese his name was K'ung Fu-tzu, 'Master K'unh'. The Catholic missionaries who first came to China many centuries after his death and who heard him spoken of, turned 'K'ung Fu-tzu' into Latin so that it became 'Confucius'.

Confucius was born about 551 BC in the province of Shantung. Little is known about his life, although many legends have grown up around his name. His father may have been a soldier, and Confucius probably held some junior position. He seems to have been a serious and reserved young man who read widely and thought deeply. He studied the classic literature of ancient China, and absorbed the wisdom and traditions of his ancestors.

At that time, China was in a miserable state of poverty and war. The Emperor had little power, and the provinces were ruled by greedy and brutal aristocrats who had no thought for the welfare of their subjects. Confucius was disgusted by the corruption and misgovernment he saw around him. It seemed to him that men had learned nothing from the past.

Confucius began to teach the ancient Chinese wisdom anew, applying it to the world around him, and devoting his life to the relief of suffering and poverty. He wrote little himself, but his followers gathered his sayings together into many volumes. He was more than a preacher; he was a practical philosopher. When he was made the governor of a city he cleared the streets of robbers, reduced taxes, improved the living conditions of the people, and persuaded the ruling classes to lead more useful lives.

One account of his life says that he was appointed to the important position of Minister, and if this is true, it would have raised his hopes of being able to put his ideals of love and brotherhood into practice even more widely. But the evils of the time were too deeply rooted for one man to cure, and few people were prepared to devote themselves to his cause. The life of the imperial court in particular was very corrupt and pleasure-loving, and, at the age of 54, Confucius seems to have resigned his appointment in disgust.

For the next 13 years he wandered through China searching for someone who would understand and value his teaching. Everyone received him coldly, and his ideas were rejected as being too high-flown to be put into practice. In his old age he felt frustrated by his failure to persuade men to lead better lives and he died in 479 BC, a broken-hearted man.

The teaching of Confucius has remained one of the chief influences upon Chinese life and thought. He himself said: 'I teach nothing new. I only hand on the ancient wisdom.' But he did more than this. He took what was best in the teaching of ancient China and put it in a form which was clear and forceful. Here is one of his sayings: 'To be in sympathy with all things; to love all men; to allow no selfish thoughts – this is the nature of goodness.'

Although Confucius did not succeed in his aims, and although he was despised for some time after his death and many of his books of sayings were burned, he was come to be greatly revered. In Chinese temples sacrifices have been offered to him for centuries, just as they are offered to the sun and the moon. Just over 100 years ago the last Emperor of China elevated Confucius to the same rank as the sky and earth, the powers most honored by the Chinese.

Yet Confucianism is not really a religion, nor is its founder worshipped in the same way as Jesus Christ. He would not have wanted to be, for he regarded the gods as symbols of natural forces, and as the spirits of ancestors. He did not want honor for himself, but he wanted his principles to be observed; obedience to parents, respect for the family, peace between rulers and their subjects, justice and mercy between man and man. His wise, humane teaching is as much needed today as it was 25 centuries ago, and is well summed up in the words of one of his followers: 'Within the four seas all men are brothers.'