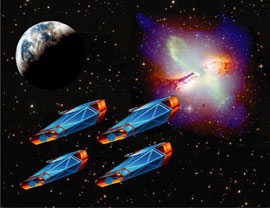 Constellation-X was a concept for a set of powerful X-ray telescopes that would have orbited close to each other and worked in unison to observe simultaneously the same distant objects, combining their data so that they would have had 100 times the power of any previous single X-ray telescope.

Constellation-X had been designed to perform X-ray spectroscopy with unprecedented sensitivity and spectral resolution. The measurement of large numbers of X-ray spectral lines in hot plasmas would have allowed astronomers to determine the flow of gas in accretion disks around black holes, in active galactic nuclei, and in binary X-ray sources, measure the population of newly-created elements in supernova remnants, and detect the influence of dark matter on the hot intergalactic medium in clusters of galaxies.

Constellation-X was an element in NASA's Structure and Evolution of the Universe theme. However, the mission never progressed beyond the early design stage.