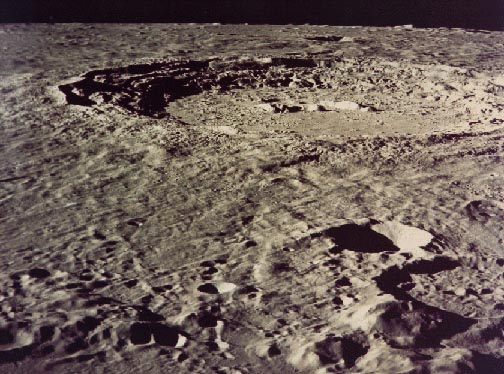 Photo of Copernicus taken by Apollo 17.

Copernicus is a relatively young, prominent impact crater on the Moon. Copernicus is 93 km (58 mi) wide and lies on the eastern part of Oceanus Procellarum (the Ocean of Storms) on the northern nearside of the Moon (9.7° N, 20.0° W).

The inner wall is terraced and rises from the crater's floor, at a depth of 3,750 m, to a height of 900 m above the surrounding maria. Three distinct terraces are visible, as well as arc-shaped landslides due to slumping of the inner wall as the crater debris subsided. A group of central mountains rises to 400 m above the floor.

Copernicus is a mere 800 million years old. Material ejected from it forms a bright system of rays out to a distance of 800 km from the crater. These rays are superposed on all other surrounding terrains which places the crater in its namesake age group: the Copernican system, established as the youngest assemblage of rocks on the Moon.