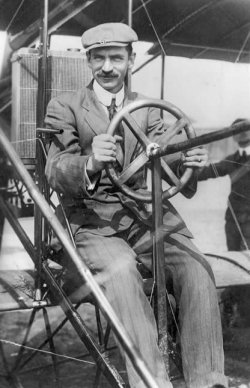 Curtiss in the seat of one of his biplanes.

Glenn Curtiss was an American aviation pioneer who began, as did the Wright brothers, by building bicycles. In 1908 he won a trophy for the first public flight of more than 1 km (0.6 mi) in the US. Curtiss invented the aileron, built planes during World War I (1914–18), and his JN-4 ("Jenny") was a well-known trainer. The first practical seaplane, built by him, first flew in 1911. His company and that of the Wrights merged to become the Curtiss-Wright Corporation.