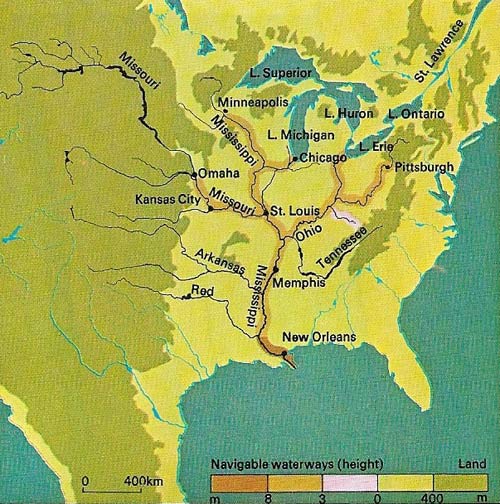 Fig 1. The river systems of the Mississippi and Ohio form one of the largest in the world. Their basins cover two-thirds of the United States. Many of the rivers are navigable and canals have been built to connect other waterways, extending the system to provide a continuous water route from New Orleans in the south to Chicago and the St Lawrence Seaway, and via the Ohio River direct to New York. Pittsburgh and Philadelphia were also in the 19th-century canal network, which connected with both the Columbia River and Chesapeake Bay. There is also a link from New York direct to the St Lawrence.

Fig 2. The St Lawrence Seaway provides a 3,830 km (2,380 mile) inland route for ocean-going ships from the Atlantic to the heart of Canada and the United States. From Montreal it rises 51.5 m (169 ft) to Lake Ontario via two small lakes, three canals, and seven locks. Between Lake Ontario and Lake Erie the waterway bypasses the Niagara Falls rising 98 m (322 ft) in 45 km (28 miles) through the eight locks of the Welland Ship Canal. From Lake Erie the route passes via Detroit and the St Clair River and lake into Lake Huron. This lake connects directly with Lake Michigan, via the Mackinac Strait, so linking the port of Chicago with the sea. The St Mary;s Falls, between the northern point of Lake Huron and Lake Superior, are passed by a canal with five locks. This section is icebound in winter. 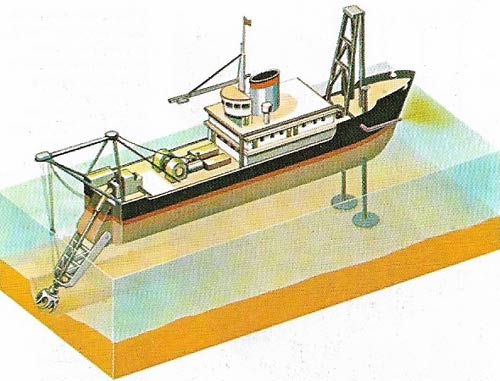 Fig 3. The depth o fa shipping canal must be rigorously maintained to ensure that ships do not ground, causing delay not only to themselves but to all shipping along the length of the water channel. Dredgers of many types are use. This cutter dredge has a tin-leg bracing system to resist the action of the rotary cutter. A suction pipe draws off the debris and discharges it away from the vessel or into a barge moored alongside. 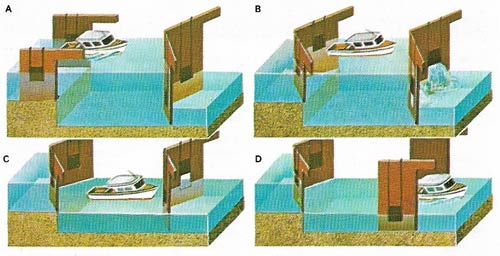 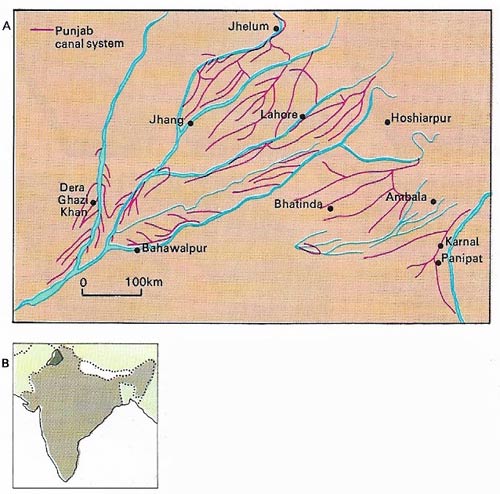 Fig 5. A system of irrigation canals in western Punjab (A), constructed by British engineers, was one of the major engineering achievements of the 19th century. These were running water canals fed from the River Indus and the tributaries by building great masonry barrages. They turned an arid area half the size of England into northern India's most fertile food-producing region (B). 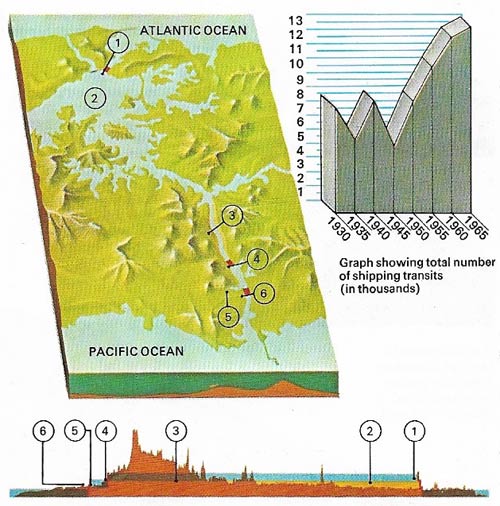 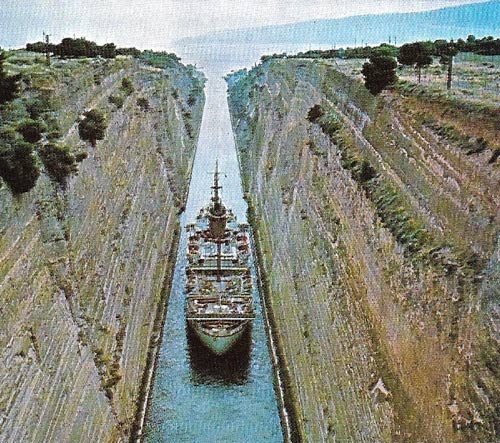 Fig 7. A massive excavation 5.6 km (3.5 miles) long was made in 1893 across the isthmus at Corinth to link the Ionian and Aegean seas. The Corinth ship canal has no locks, the whole waterway being at sea level to allow the direct passage of vessels.

A canal is an artificial waterway for irrigation, drainage, navigation, or in conjunction with hydroelectric dams. The first canals were built 4,000 years ago in ancient Mesopotamia. The longest canal able to accommodate large ships today connects the Baltic and White seas in northern Europe and is 227 km (141 miles) long. The heyday of canal-building in England was from the late 18th to the early 19th century.

Modern canals provide important transport highways throughout Europe and, to a lesser extent, North America. The rivers Rhine and Moselle feed an extensive canal system in Germany that has connections to the Dutch, Belgian, and French networks. A major waterway was constructed to connect the Rhine with the Black Sea, via the rivers Main and Danube, and a great network has been developed around the rivers Volga, Ob, Yenisei, and Lena across Russia.

One of the earliest reports of a man-made canal tells of one completed by Ptolemy II (died 247 BC) of Egypt to link the River Nile with the Red Sea. Natural inland waterways such as major rivers had been used as trans-port routes since earliest times and primitive single-gate locks are known to have been used in China from about 500 BC. These were openings in weirs through which water poured. Boats were carried downstream by the rushing waters or winched up against the current. A two-gate lock, built at Vreeswijk, Holland, in 1373, is believed to have been the first true pound-lock – a lock in which the flow of water is controlled by alternately lifting up or lowering the gates. The first to have swinging mitre gates of the kind used today was designed and built by Leonardo da Vinci (1452–1519) when he was engineer to the Duke of Milan. Miter lock gates, when closed, form an angle pointing upstream so that water pressure holds them shut.

In 1681 French engineers made history when they completed the 250 km (155 mile) long Canal du Midi linking the Atlantic Ocean with the Mediterranean Sea by a man-made waterway. It had many locks connecting the River Garonne, near Toulouse, with the River Etang de Thau, near Sete and included three aqueducts and a tunnel.

The greatest single obstacle to the industrial development of Europe and the United States in the eighteenth century was poor internal communication. Thus it was the needs of industry that brought about the dawn of the canal age on both sides of the Atlantic.

In the United States canals were built to link the Ohio and Mississippi basins (Fig 1) with the east coast ports, to provide routes from inland areas to the navigable rivers and to bypass natural obstacles on these rivers. The most spectacular early American achievement was the completion, in 1825, of the 580 km (363 mile) Erie Canal linking New York City with Lake Erie. It took eight years to build. The lake was subsequently connected by canal to the Ohio River and so to the Mississippi and the port of New Orleans.

By 1850 England was traversed by more than 8,000 km (5,000 miles) of navigable rivers and canals. Canals were also constructed throughout Europe, especially along the North Sea coasts of the Netherlands, Belgium and France.

During the nineteenth century British civil engineers conceived and constructed a perennial irrigation system in northwestern India (Fig 5) in which huge masonry barrages were built across the rivers to divert part of the water into a great network of canals. By the time India and Pakistan gained independence in 1947 the subcontinent had more than 20 million hectares (50 million acres) of previously arid land under irrigation.

A canal, unlike a road, must be built in level sections and the canal engineer's first problem is the selection of a route along which a level can be maintained with the minimum of engineering work. This problem is approached by siting a canal to run as far as possible along the natural land contours. Where high ground must be crossed the cut can be correspondingly deeper or the canal can be built in a tunnel. Where there is an unavoidable depression in the ground the best solution is to construct the canal along a low embankment. There comes a point where the rise or fall of the land to be traversed requires so deep a cut, so long a tunnel or so high an embankment or aqueduct that it is more economic to build a lock and continue the canal at a new level.

Wherever canals are built obstacles, such as roads, streams and rivers, have to be crossed. If they are roads or railways, bridges must be built; if they are waterways, then either the canal or the waterway must be carried on an aqueduct. Where locks are introduced there must be a sufficient supply of water at the highest level to replace the water that flows when any lock is used (Fig 4).

A canal must not lose excessive water by seepage into the ground. Where the ground is porous, and where a canal runs along a man-made embankment, the engineer must waterproof its bottom and sides. In early canals this was achieved by lining the canal with puddled clay. Today there are alternative materials including bituminous materials, sheet polythene and concrete. Machines have been developed to lay a continuous concrete lining at minimum cost and these are increasingly used for irrigation canals in the Middle East and other arid areas to carry water long distances.