Skeleton of the domestic cat.

Anatomy of the domestic cat.

Musculature of the cat. 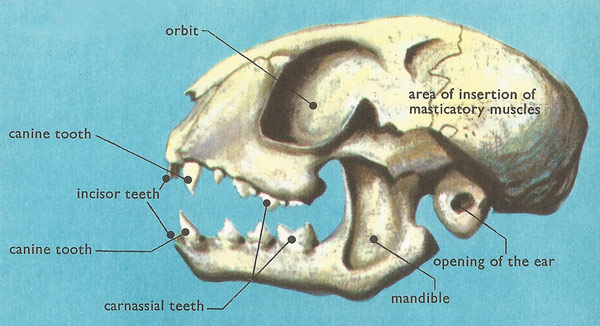 Skull of the domestic cat. 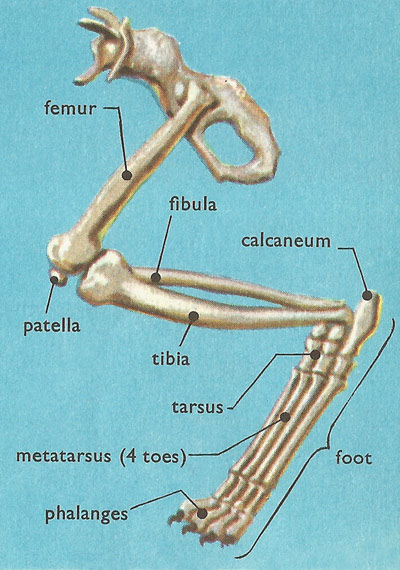 The bones in a cat's leg. 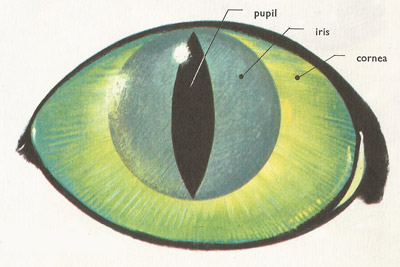 Eye of a domestic cat.

(Left) Front paw of cat with claws extend. (Right) A cat's paw seen from underneath.

The hind limbs of the cat are much longer than the front ones; this enables the animal to leap high and run very fast. The vertebral column is continued into the tail, the bones of the tail being known as the caudal vertebrae.

The orbits or eye-sockets are very large to accommodate the cat's large eyes. The teeth of a carnivorous mammal are adapted for seizing prey and biting or tearing flesh. The canine teeth are long and sharply pointed to serve as weapons. The last upper premolar and the first lower molar have sharp edges and work against each other like a pair of scissors to cut or shear the meat; they are called the carnassial teeth.

The cat is a digitigrade animal, which means that its heels do not touch the ground; instead it runs on the tips of its toes. What looks like the last segment of the leg is really the foot; the knee is high up, at the level of the stomach.

The general plan of the cat's internal organs, and the way they function, are similar to those of other mammals. Features characteristic of the cat are:

The teeth, which are adapted for eating flesh, are typical of carnivores.

The intestine, which is rather short, as in other carnivores, and is adapted for this diet (meat is easily digestible).

The eye has a pupil shaped like a vertical oval which can be greatly dilated or contracted. In the retina of the cat, which is a nocturnal animal, the rods are more numerous than the cones. Since the rods are sensitive to light intensity, while the function of the cones is to distinguish colors, we can suppose that the cat sees well in the dark but has little in the way of color perception. Behind the retina there is a layer called the 'luminous tapetum' which reflects light. This is another feature which enables the cat to see well in a very dim light, and is what causes the animal's eyes to shine in the dark when a light is directed onto them. In ancient times the shining of cats' eyes was attributed to magic.

The cat generally has five toes on its front paws and four on its hind ones. In all of them the last toe-joint does not touch the ground and each one has a long curved claw which is completely retractile: each claw is moved in and out of a sheath by a special muscle.

The whiskers are organs of touch. At the base of each one there are nerve endings, and when it is too dark for even a cat to see they give warning of an obstacle as soon as they touch it.

The system of muscles of the cat, as in all carnivores which have to capture their prey, is very strong and adapted for swift running and leaping.