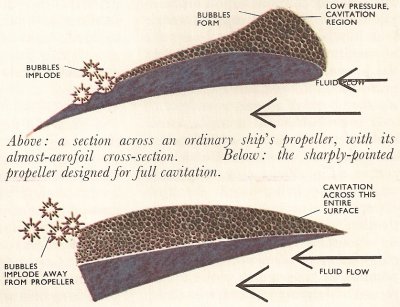 Cavitation is the rapid formation and collapse of vapor pockets in a fluid flowing under very low pressure. Cavitation occurs around propellers and in pump systems, and is a frequent cause of structural damage to these components.

At the tip of high-speed ship's propeller blade, for example, water is forced to move backward at high velocity. One important effect is that the pressure in the water drops. The higher the water's velocity, the lower the pressure becomes. This is as predicted by Bernoulli's law, the basic formula of fluid dynamics. When the pressure drops, the boiling point of water drops. With a reduced pressure pushing them back into the body of the liquid, more and more water molecules are able to escape into the vapor state. A vapor bubble starts to form in the liquid, and quickly grows as more vapor molecules escape into it. This effect is cavitation.

So, at high propeller speeds, the water starts to boil around the leading edge of the propeller. Bubbles of vapor form in the water. Some of these implode near the surface of the propeller blade with sufficient force to blast off small pieces of metal, and eventually the propeller becomes eroded. This became so serious in one large transatlantic liner that the propellers had to be replaced after her maiden voyage.

With better-designed propellers, the problem is not so acute, and even low-speed vessels can be operated with a small amount of cavitation biting away at the edge of the blades. But cavitation, a form of turbulence, leads to an extra drag on the propeller blades, and causes a drop in the overall efficiency of the propulsion system.

There are no half-measures with cavitation. propellers can be operated with none at all (or a very small amount), or a very large amount – full cavitation or super-cavitation. No propeller would last long if it were operated with a middling amount of cavitation and it would be very inefficient, so this region of operation is avoided. The jump to full cavitation is made possible by specially-designed propellers, with the flat airfoil cross-sections reminiscent of supersonic aircraft and very sharp leading edges to bite into the water. The sharp edges are essential to reduce the cross-sectional area affected by cavitation, and hence reduce the extra drag caused by this effect. The pressures are so low under full cavitation that the bubbles implode at some distance from the surface of the blades, where they can do no damage. These high-speed propellers are used for hydrofoil craft, which cruise at around 60 knots.

Submarines are also capable of traveling at high speeds, but they normally travel underwater, where there is little danger of cavitation. The pressure in the water increases with depth. Underwater, the pressure includes the weight of the water above, as well as atmospheric pressure. Although the pressure is lowered in the vicinity of the submarine propellers, it can never drop low enough for the water to boil and cavitation to set in.