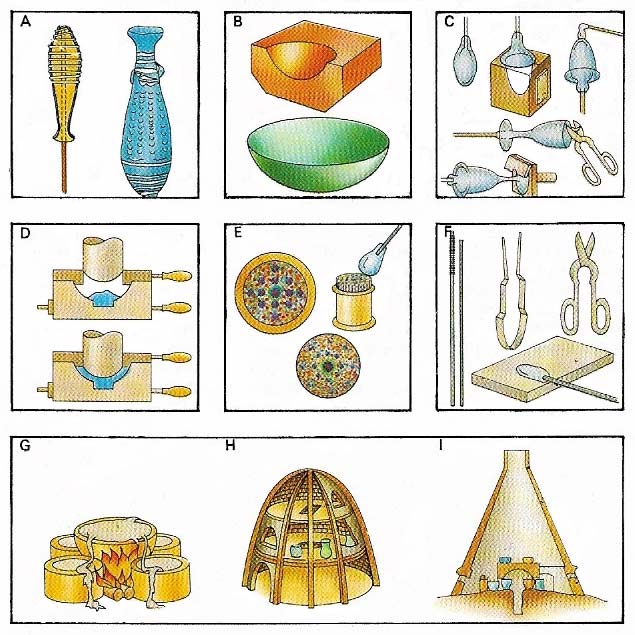 Fig 1. Glass was made in antiquity by (A) fusing raw material held by a glass thread on a sand core to form a bottle, or (B) by shaping it in a mould. A wine glass was made (C) by blowing molten glass in a mould, adding a stem, shaping the foot and trimming. Press moulding (D) is a more modern technique. A decorative paperweight (E) was made by fusing coloured glass rods and surrounding them with molten glass. Glass-working tools (F) include a blow-pipe, rod, tongs, shears, and rolling plate. Glass was originally melted in a crucible (G); later bell (H) and cone (I) furnaces were used. 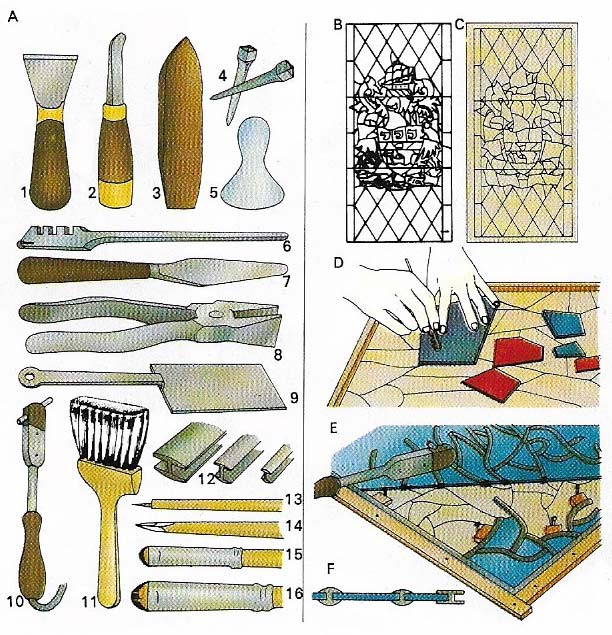 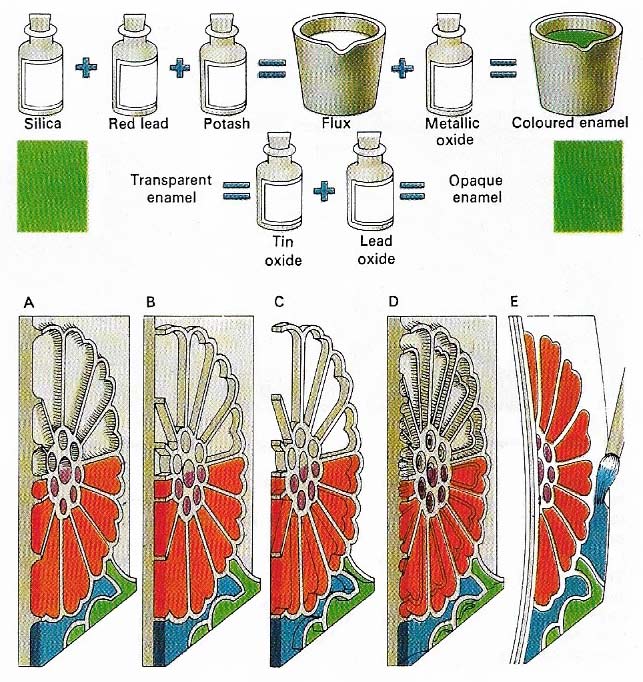 Fig 3. In enameling, a coat of glass is fused to a metal surface. Silica, red lead and potash are melted to make a flux, which can then be colored by the addition of tin and lead oxides gives an opaque enamel. In champleve enamelling (A), pieces of metal are cut away, leaving metal lines between them to form the outline of a design. Pulverised enamel is laid in the troughs and then fused. Afterwards, the enamel is filed and polished. The other techniques of enamelling shown here – cloisonne (B), plique a jour (C), basse-taille (D) and enamel painting (E) – are all variants of champleve enameling. 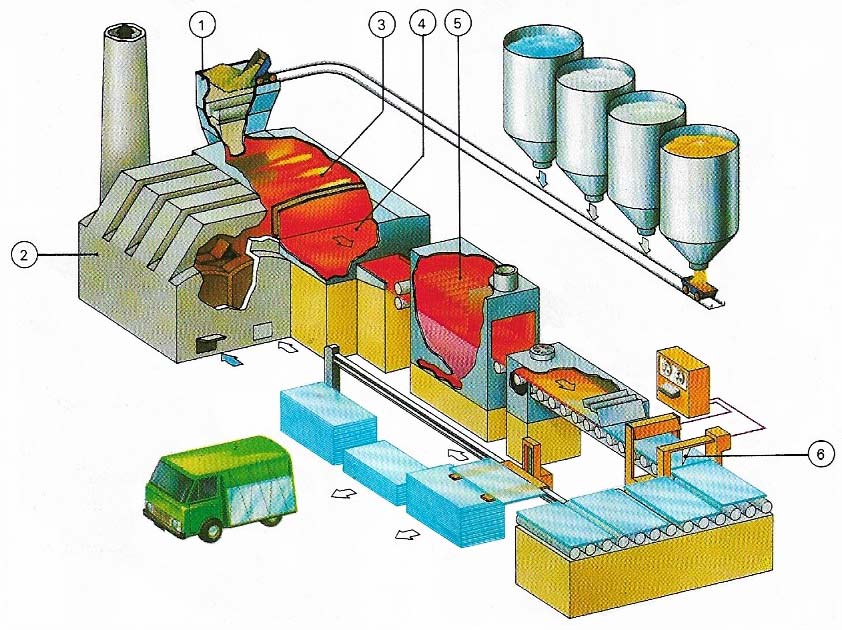 Fig 4. The float glass process was developed by Pilkingtons Ltd in 1959 in the UK and is now used throughout the world for the production of flat glass of the type used, for example, windows. The ingredients are mixed in a hopper (1) and then melted in an oil-fired furnace (2); the molten glass (3) then passes on to a float bath of molten tin (4) in a special non-oxidising atmosphere. The glass spreads out over the molten surface to form a uniform, flat sheet. As the glass passes through the bath it is gradually cooled to that it emerges with a firm surface that is not deformed by the rollers that take it into an annealing lehr (5) where it undergoes further cooling before it passes to a computer-controled cutting and stacking operation (6). 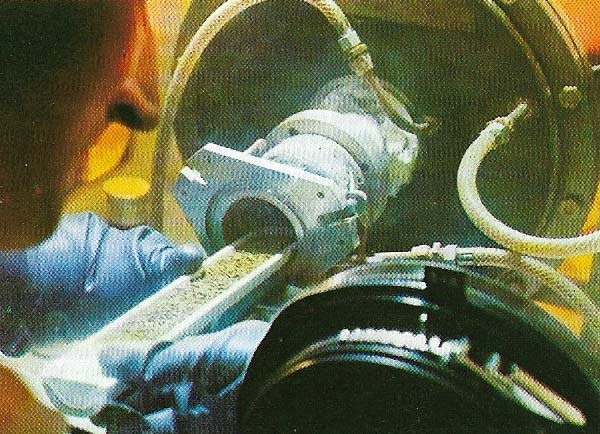 Fig 5. Oxides or carbides of fissionable elements such as uranium are sintered to form ceramic pellets which are packed into metal containers and used as fuel elements in nuclear reactors.

Ceramics are materials produced by treating non-metallic inorganic materials at high temperatures. They are among the oldest products of human ingenuity. Yet so great is their versatility that, even today, new uses are being found for this class of materials, from high-voltage insulators to radar and computer components and nuclear fuels.

In general, ceramics are hard, chemically inert under most conditions, and can withstand high temperatures in industrial applications. Many are refractory metal oxides. Primitive ceramics in the form of pottery date from the 5th millennium BC, and improved steadily in quality and design.


The story of ceramics

During the last Ice Age, hunters made clay images of animals and hardened them near fires. Clay basically is a mixture of aluminum and silicon oxides, together with various impurities. When heated moderately it loses its chemically-bound water and forms a porous, hard material suitable for making hearths, images, and, if pre-shaped, pots. To make a non-porous product, higher temperatures are necessary to that a portion of the material melts, or fuses, thus filling up the tiny holes in it. If silica is fused and then allowed to cool slowly the result is glass rather than pottery. Glazing – the production of a glassy surface on a solid object – dates back to 4000 BC but the first all-glass vessels did not appear until 1500 BC, and it was nearly another 1,500 years before the technique of blowing glass vessels was developed. The production of ceramics and glassware was a highly mechanized industry, even in the nineteenth century. But in the second part of that century developments in technology put the craft on a more scientific footing. The chemical structures of ceramics contain no free electrons so they are non-conductors of electricity. This property became important when large-scale electricity generation began. The development of satisfactory insulators, for example, required much more knowledge of materials than did the manufacture of teacups. Consequently, scientific studies of raw material composition and firing methods had to be undertaken.

Chemically, ceramics and glass are composed largely of compounds of oxygen with other elements. Glass, which is composed largely of silica (SiO2), is a special case – most oxides do not form glasses but many ceramics contain a glassy component. Porcelain, for example, is made from a mixture of clay, sand, and an alkaline. Such fluxes, often common minerals such as felspars, lower the temperature at which silica fuses. A fragment of porcelain viewed through a microscope can be seen to have several different kinds of particles bound together by a glass matrix.

Many of the particles in a ceramic are tiny crystals in which the atoms are arranged in simple geometric patterns. In a gas there are no such geometric regularities and the atoms are orientated at random. Physically, glass has a crystalline structure more like that of a liquid than of a solid. If glass is not cooled properly (annealed) from the molten state, tiny crystals do appear and the result is a brittle, semi-opaque material. Some crystal formation can occur with slow decomposition and some very old glass, as in Roman bottles, is partly opaque due to the chemical action that has taken place over the hundreds of years that the glass has been buried. Recently, techniques have been devised to encourage controled crystal formation in glass by reheating it under specific conditions. The result is a tough heat-proof glass ceramic, which is now widely used in kitchen ovenware.

In firing some ceramics it is not necessary to form much glassy material in order to hold it together. Where the solid has formed solely as a result of sintering (aggregating as a result of applied heat) with no fusing, however, it is usually porous like brick. This Is because the particles of material come together more closely but, in most cases, do not drive out all the minute air holes.

High-density ceramics can now be prepared as "whiskers", which may be used to strengthen other materials – or even to strengthen more conventional ceramics. Thus ceramics can play an important part in modern engineering, in some cases replacing metals – as in engine parts that must operate at ultra-high temperatures. Not all ceramics are oxides, and some of the newer ones are compounds of different elements with carbon or nitrogen. Carbide-tipped drill bits exemplify the everyday uses of new ceramics. Electricity and magnetism are usually associated with metals but in the developed countries the electrical and magnetic properties of ceramics are widely used. Solar batteries. Which convert sunlight directly into electricity, rely on the use of the modern ceramic substances.

If some iron-containing ceramics are cooled in a particular way the materials that result are capable of converting mechanical into electrical energy (and vice versa) because of the alignment of electrical dipoles in the material. Much of today's sound transmission and recording is based on such "ferroelectrics". Similarly, "ferries" are ceramics in which the magnetic rather than the electrical dipoles have been aligned, and they form an essential part of computers, radar equipment and small electric motors.