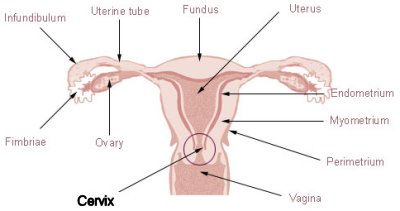 Location of the cervix. 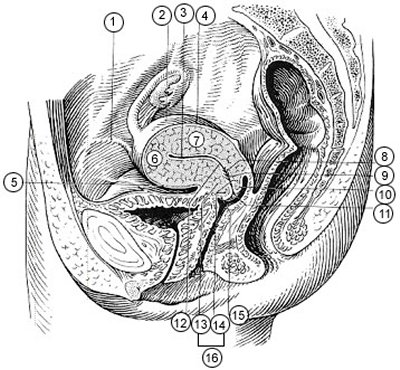 The cervix is a small, cylindrical organ, several centimeters long and less than 2.5 cm (1 in) in diameter, which comprises the lower part and neck of the uterus. The cervix separates the body and cavity of the uterus from the vagina. Running through the cervix is a canal, through which sperm can pass from the vagina into the uterus and through which blood passes during menstruation. The cervical canal, which forms part of the birth canal during childbirth, dilates (expands) widely to allow passage of a baby.

The bulk of the cervix consists if fibrous tissue with some smooth muscle. This tissue makes the cervix into a form of sphincter (circular muscle) and allows for the great adaptability in its size and shape required during pregnancy and childbirth.


Further anatomy of the cervix

Within the cervix itself, the anatomy is subdivided into the endocervix and the exocervix or ectocervix. The upper two-thirds of the cervix (endocervix) contains columnar glandular epithelium. Adenosquamous carcinoma may arise here.

The lower third of the cervix (exocervix or ectocervix) is comprised of stratified squamous epithelium extending onto the lip of the cervix. The midpoint between the exocervix and the endocervix is the squamocolumnar junction.

The cervix projects into the vagina, and the circular trough formed at the upper end of the vagina around the cervix is the fornix. There are four fornices, two lateral, plus anterior and posterior. The lip or portio (portio vaginalis cervicis) is the portion of the cervix that extends into the vagina.

The Pouch of Douglas (cul-de-sac or rectovaginal septum) is the space between the rectum and the uterus. This is the lowest part of the abdominal cavity.