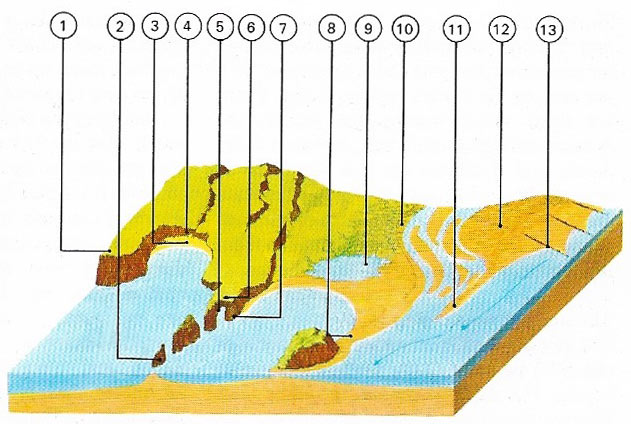 Fig 1. Coastlines are shaped by erosion and deposition which are the result of wind, waves, currents and tides interacting with the rocks and sediments of the land. Among common coastal features are headlands (1j of relatively hard rock, isolated rock pillars called stacks (2), cliffs (4), natural arches (5), caves (7) and blowholes (6) in the roof of caves. Features resulting from deposition are beaches (3j, tombolos (8), lagoons (9), salt marches (10), spits (11) and sand dunes (12). To slow down the drift of eroded material along a coast, groynes (13) are often built. 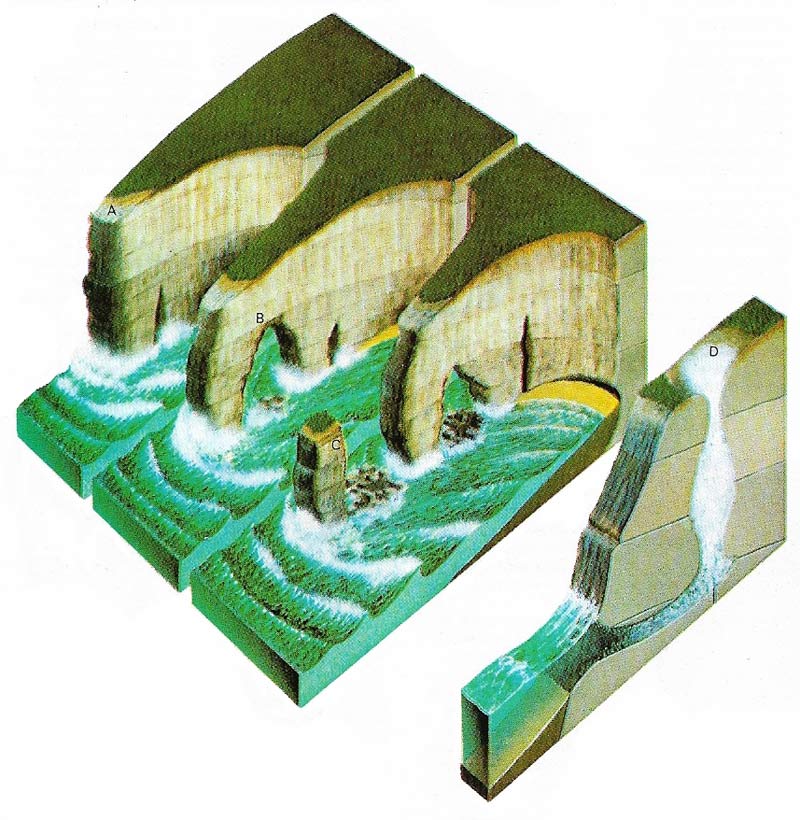 Fig 2. Wave erosion usually occurs on both sides of a headland (A). When caves eroded in a headland meet, and arch is formed (B). When an arch collapses, a stack remains (C). Upward erosion by surging waves in caves forms blowholes (D), through which spray emerges. 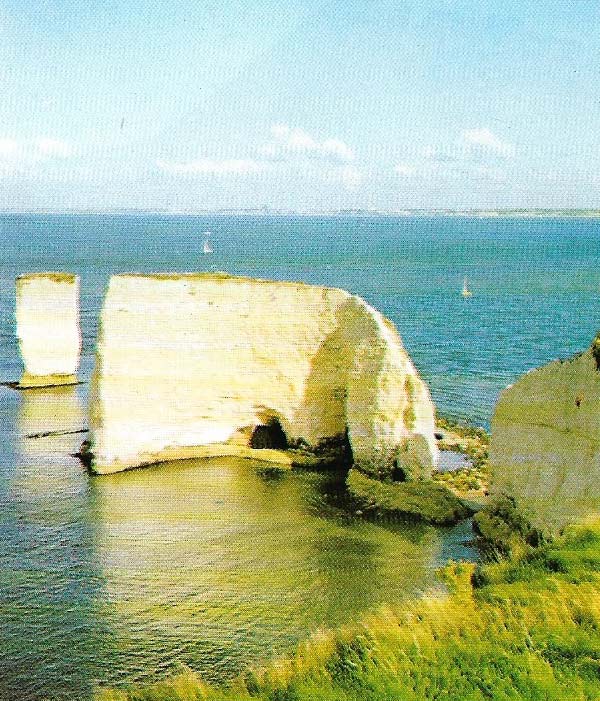 Fig 3. A stack, standing like a pillar offshore, is what remains after the ceaseless erosion of the sea has carved away adjoining rock.

Fig 4. Longshore drift is the most important way in which loose sand and pebbles are carried along a coastline. When waves are driven obliquely by wind and current against the shore (A), debris is swept up the beach in a forward sweeping curve (B). As the wave subsides, backwash drags the material back by the shortest, steepest route at about right-angles to the shore (C). Material is thus gradually carried along the coast in a zigzag path to be deposited elsewhere.

Fig 5. Sand spits (1) are ridges of material transported by longshore drift. The material is dropped where waves meet an obstacle, such as a headland (3), or where the coastline suddenly changes direction. While spits are attached to land, bars (2) are offshore ridges of deposited material, generally parallel to the shore. Bars accumulate on gently sloping beaches where backwash is not very strong. 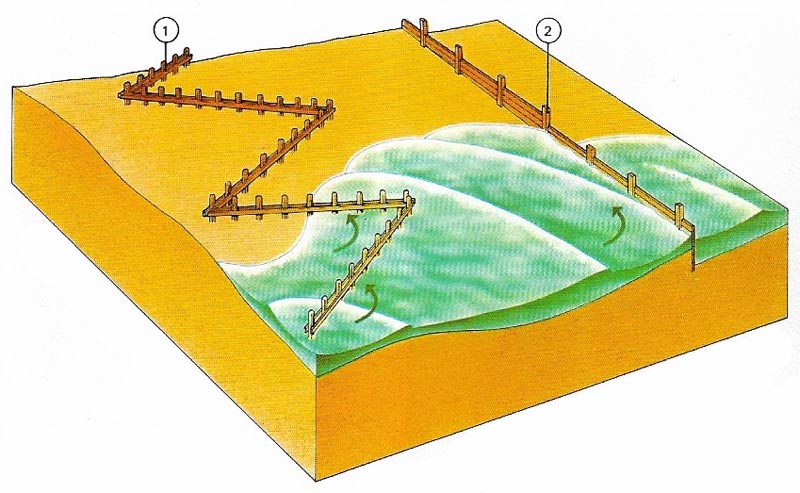 Fig 6. Groynes are built to offset the tendency for sand and shingle to be gradually carried sideways along a beach. There are two main kinds of groyne. The zigzag timber pile type (1) has piles driven 2 m (6ft) below the ground and standing 1 m (39in) above ground. The straight, solid groyne (2) consists of heavy planks bolted to piles that are also sunk 2 m (6.5ft) into the ground.

Fig 7. Changes in sea-level caused by an increase in the volume of ocean water, or by earth movements, determine the character of some coastlines. When a coastal area unaffected by glaciation (A) is overtaken by an ice age, glaciers and ice caps form on the land (B). The sea-level drops and the weight of the ice eventually depresses coastal valleys. With the end of the ice age, melted ice returns to the sea. Even though the land begins to rise, recovery is not fast enough to offset a considerable rise in sea-level (C). Flooded river valleys or fiords (drowned glacial valleys) characterise such a coastline – a coast of submergence. 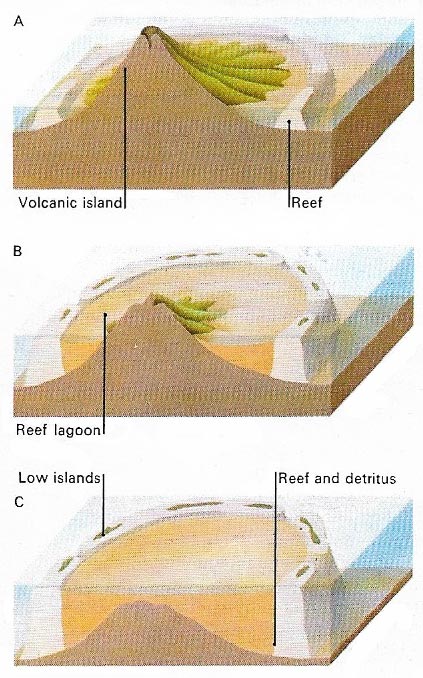 Fig 8. Atolls and coral reefs are found only in tropical seas. The most striking coral feature is the atoll, a ring or horseshoe-shaped group of coral islands. Corals grown in warm, fairly shallow water to depths of about 90 m (300 ft). But the depth of coral in many atolls is much greater than this. One theory is that the coral began to form as a reef in the shallows of a volcanic island (A). Then the sea-level began to rise and the island slowly sank (B). But the coral growth kept pace with these gradual changes, leaving an atoll of low islands (C). In this way, depths of coral to as much as 1,600 m (5,250 ft) can be explained.

Coasts are constantly changing, sometimes at a dramatic rate. During a North Sea storm in 1953, powerful waves battered eastern England. Near Lowestoft in Suffolk, the sea undercut an 8 m high (26 ft) cliff and removed 11 m (36 ft) of land in about two hours.

The rate of erosion, which is caused by waves, currents and tides, depends on the nature of the rock (Fig 1). Tough outcrops of granite are much more resistant then, for example, the glacial boulder clays, gravels, and sands in Massachusetts where erosion of the cliffs of Martha's Vineyard island is taking place at a rate of 1.7 m (5.5 ft) a year where a lighthouse has had to be resited four times.

The force exerted by waves in the Atlantic has been estimated to be about 9,765 kg per square meter (2,000 lb per square foot) and this force may be three times as great during severe storms, when blocks of concrete weighing more than 1,000 tonnes have been dislodged. The hydraulic action of water is seen when high waves crash against a rock face. Air compressed by the water in cracks and crevices expands as it is released, sometimes with explosive force, enlarging cracks or shattering rock faces.

Another form of marine erosion is corrosion, when waves are armed with sand, pebbles, and during storms, boulders. The waves lift up these materials and hurl them at the shore, bombarding and undercutting the bases of cliffs. Such action may hollow out sea caves within which erosion continues. Sometimes the roof of a cave collapses to form a small opening or blowhole. When waves pound through the cave, jets of spray spurt through the blowhole.

Because rocks differ in hardness, sea erosion may create a series of bays, cut in relatively soft rock, separated by headlands of fairly hard rock. The exposed headlands are battered from both sides. Sea caves forming on each of the exposed headland may eventually meet in an arch. When the arch collapses, and offshore pillar of rock, called a stack, remains behind. In this way, even headlands of hard rock are finally worn away (Fig 2, 3).

Another form of marine erosion, attrition, occurs when sand, pebbles, and rocks collide and are rubbed together by the moving water. Loose, jagged material is smoothed and ground down into finer and finer particles. The sea also erodes land by the solvent action of seawater on some rock.

Eroded material is transported along the coast mainly by wave action. Waves usually strike the shore obliquely. As they move forward, they sweep material diagonally up the beach. As the water recedes, the backwash pulls the loose fragments down the steepest slope at right-angles to the shore. This zigzag movement, called longshore drift (Fig 4), moves sand and pebbles along the coast. Currents and tides also contribute to the movement of eroded material.

Because of the importance of coastlines to man, attempts are often made to control longshore drift and erosion. Common methods include the building of groynes (low walls usually at right-angles to the shore) and sea walls to protect the coast against storm waves (Fig 6).

When material moved by longshore drift meets an obstacle, such as a headland, or where the coast abruptly changes direction, the transport of material may slow down and it may pile up in a narrow ridge called spits (Fig 5). Spits often curve part of the way across bays and estuaries. Baymouth bars are spits that seal off a bay completely. Other bars, unlike spits. Are not attached to land. They are formed in the sea and run roughly parallel to the coast. Similar features are tombolos – natural bridges joining an island to the mainland or linking one island to another.

Since the end of the Pleistocene ice age, melted ice has increased the volume of the oceans and many coastlines have been flooded. These coasts of submergence include flooded river valleys, called rias, and flooded glaciated valleys, called fiords (Fig 7). Other coasts have been raised up by earth movements. Coasts of emergence can be identified by such features as raised beaches and former sea cliffs that are now inland.

A special feature of coastlines in tropical seas results from the growth of coral. Coral polyps live in warm water with plenty of sunlight and cannot grow in depths greater than 45 m (150 ft). Fringing coral reefs develop in shallow water near the shore. Barrier reefs lie some distance away from the shore. They may be built on a non-coral foundation or they may have increased in depth as the depth of the sea increased. The most intriguing coral featured are atolls, circular or horseshoe-shaped groups of coral islands in mid-ocean (Fig 8).